I’ve finally got around to getting some figures on the table to have a go at my small battles rules Ningen Gojūnen and try out some changes I want to make to them. The battle is the Battle of Inō, 1556, which I’ve talked a bit about before. It’s a battle that’s described in a few paragraphs of the Shinchō kōki, which is more than you usually get for Sengoku battles.

The battle is usually treated as being Nobunaga’s 700 men against a combined Shibata-Hayashi army of 1700, but the narrative states that Nobunaga defeated Shibata first before turning on Hayashi. I think it more likely that Nobunaga attacked Shibata before he could link up with Hayashi. Nobunaga attacked first and it doesn’t make much sense for him to have waited for his two opponents to join forces, so I’ve decided to refight the battle in two parts, the first with Nobunaga against Shibata, and then, if Nobunaga wins, a second battle against the Hayashi.

The game was played at a 1:1 figure to man ratio, so 700 figures against 1,000. This amounted to 10 units against 15, all units being ‘bushidan’ feudally organised bands. In order to re-balance the game towards Nobunaga, I divided his army into 3 columns alongside each other, with Shibata’s army divided into 3 divisions one behind the other. This would let Nobunaga effectively bring more numbers to bear initially through having more activations at the front line.

The other advantage was Nobunaga having more ‘bushi’ counters to begin with. These are effectively re-roll markers which can be expended to re-roll a failed attack roll. Bushi counters are generated whenever a unit rolls a ‘10’ on an attack roll (here I gave Nobunaga’s force a bushi counter on a roll of ‘9’ or ‘10’). Also, where a bushi counter re-roll came up as a ‘9’ or ‘10’ a victory point was gained, whereas a ‘1’ rolled lost a victory point. This is to represent prominent warriors achieving feats of arms or taking prominent heads of the enemy. Or being killed themselves where a ‘1’ is rolled. This abstract system made more sense to me than trying to model individuals and zooming in to represent individual combats in some kind of mini-game. I think with a battle at this small scale it’s worth trying to represent the actions of individuals, albeit abstractly as well as it being a good way to represent an elite force with a game system that doesn’t allow for too much variation in quality (without adding a lot more complexity).

I’ve also introduced a loose order system for each command to operate under. This is much less restrictive than the one used for ‘Tenka Fubu,’ but essentially grants re-roll markers (represented by nobori banners) for some activations depending on the orders. Here I started Nobunaga on attack orders and Shibata on move orders. The game essentially was a race to see if Nobunaga could break the lead of the Shibata force before the latter could bring their numbers to bear. 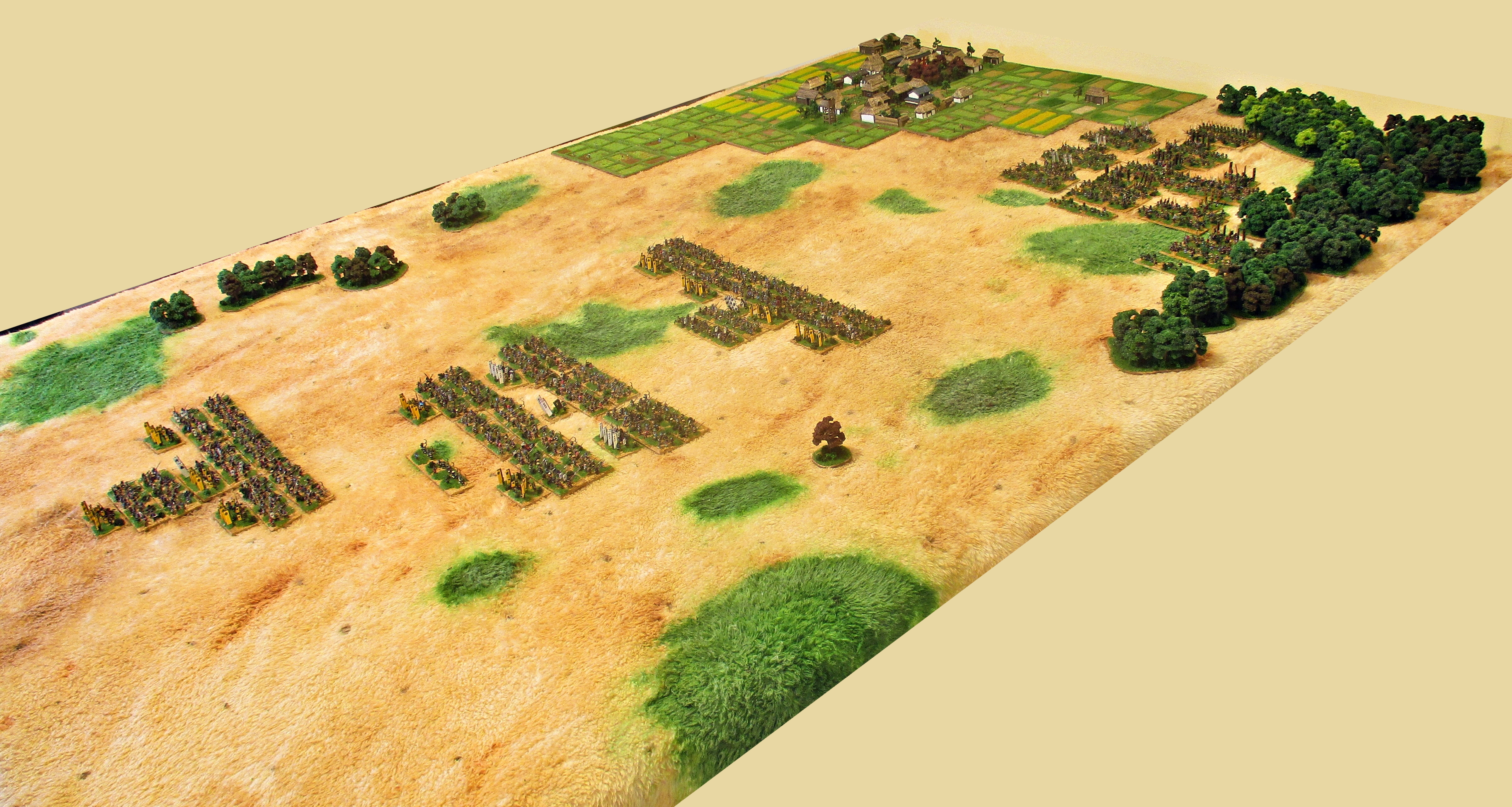 View from the Shibata side. Nobunaga’s army has emerged from the woods. The village of Inō is on the left. 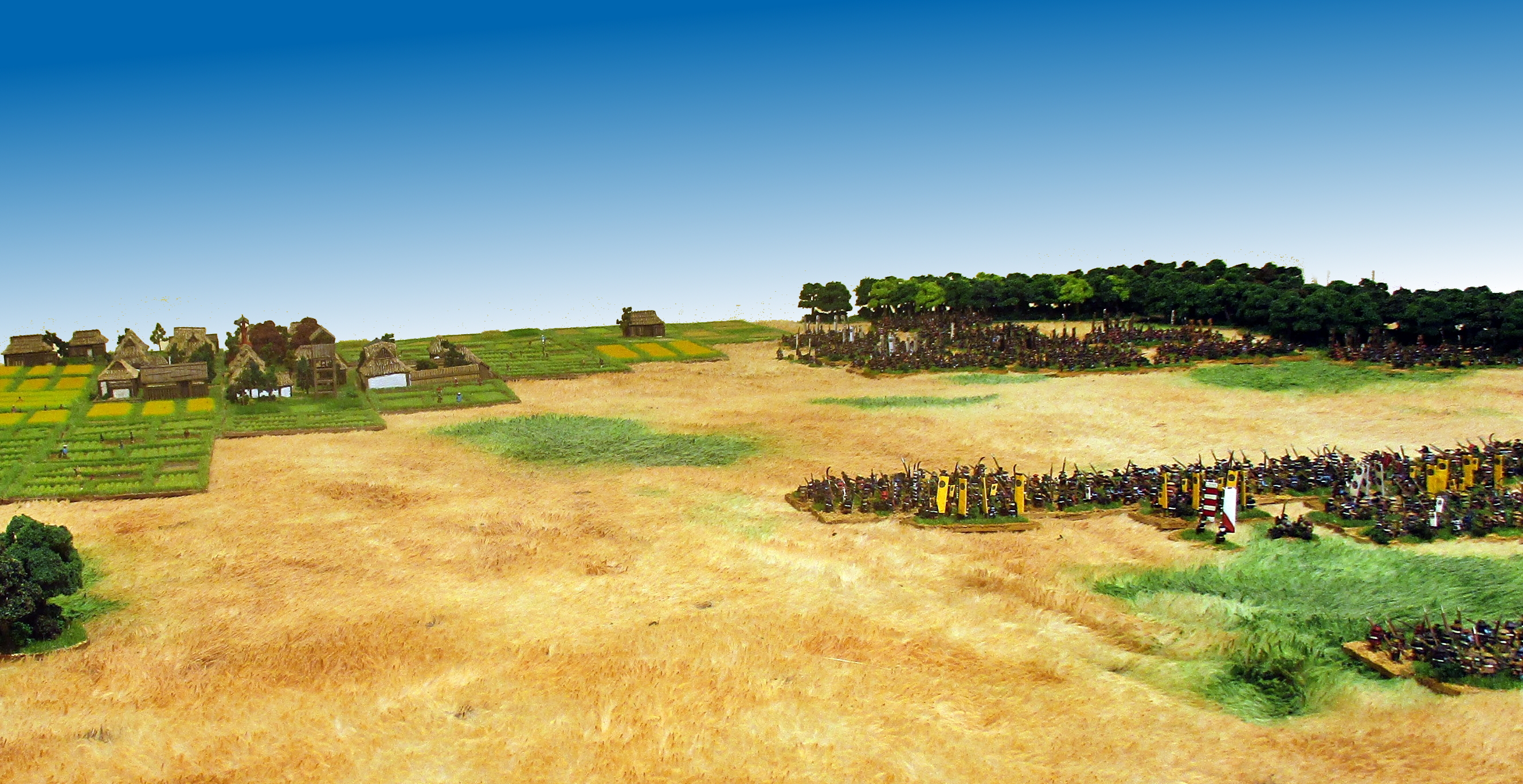 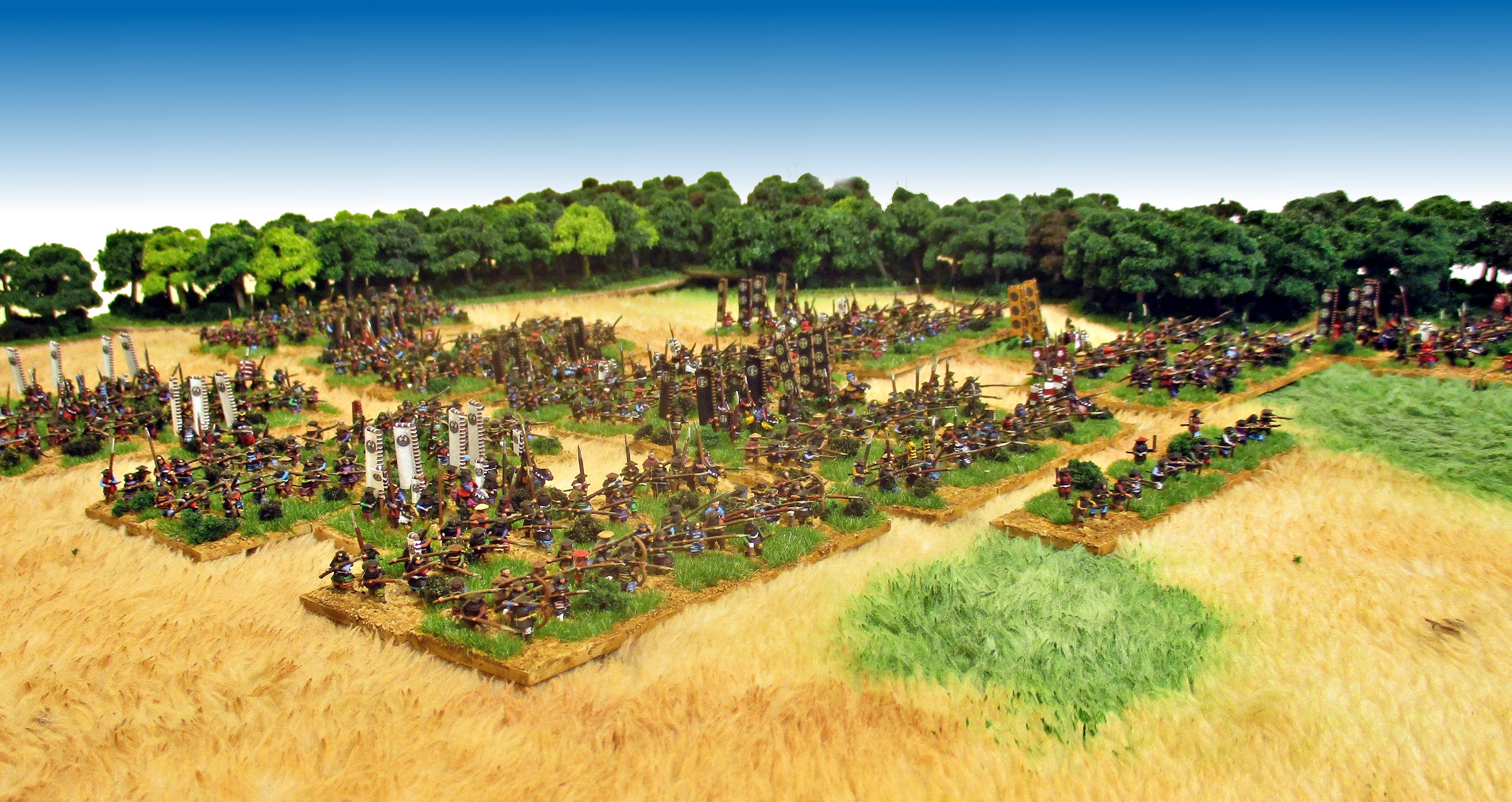 Usual stoicism from the villagers. They’ve seen it all before by now. 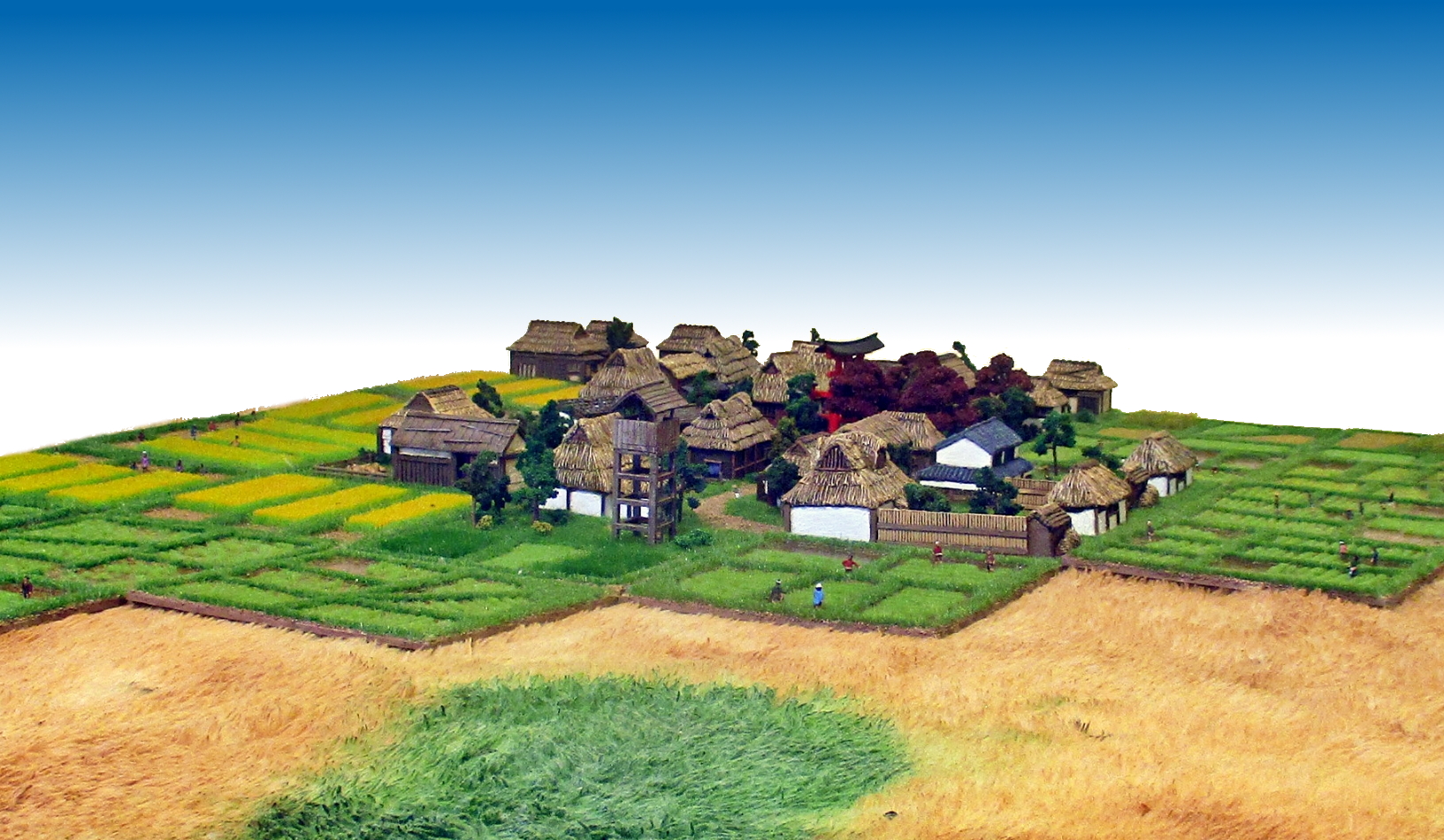 Battle is joined. The lone nobori are the re-roll markers for activation. The round bases with the tate (pavaises) are just there to delineate commands, as all the units and banners look pretty much the same!:

Shibata’s vanguard tries to hold Nobunaga’s attack while the rest of his army rushes to support. Shibata’s own command advances against the Oda left and begins to make headway. The rear Shibata command tries to advance to engage Nobunaga’s right: 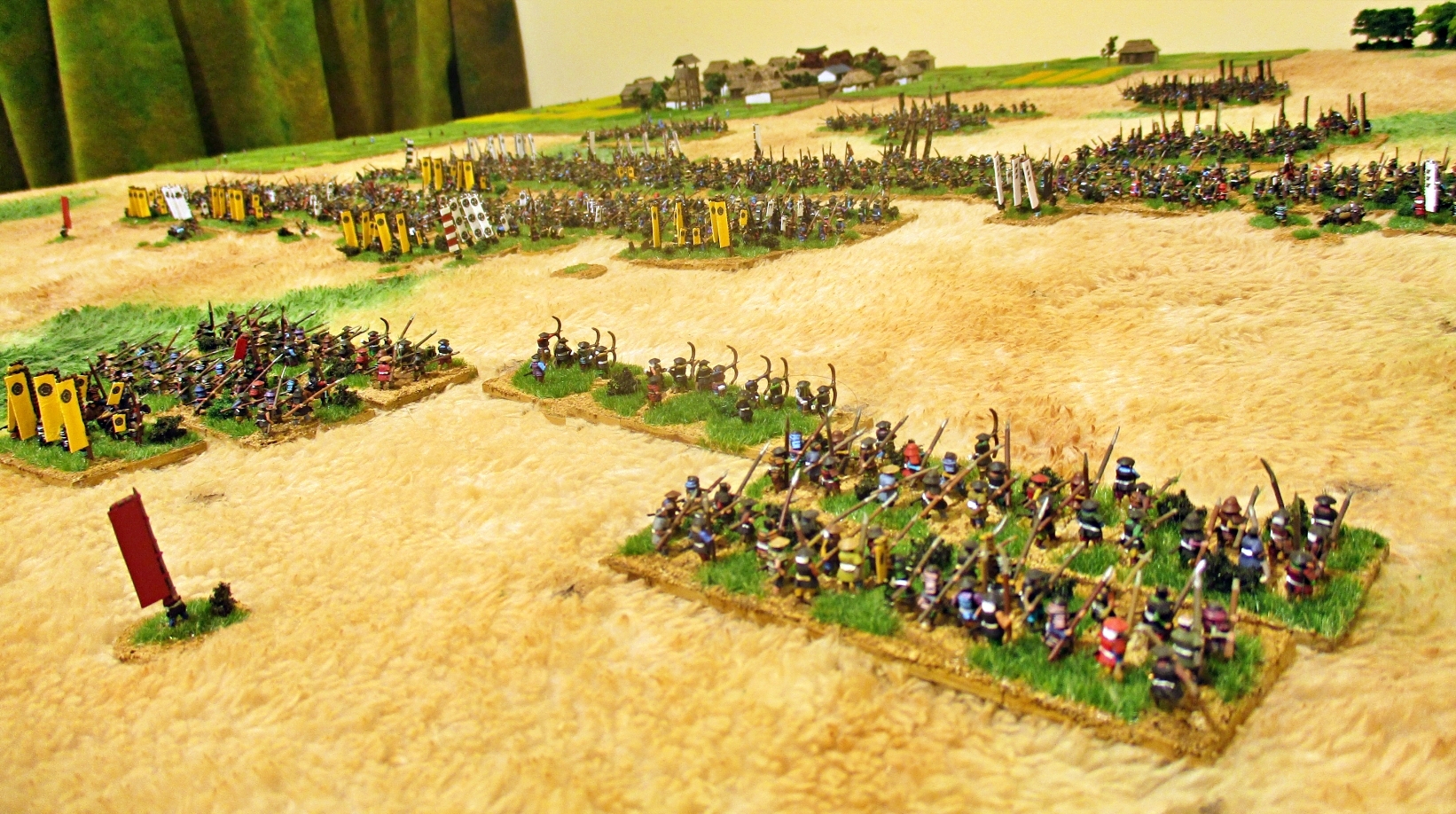 More markers here. The grass tufts are casualty markers, the lone samurai on foot is a ‘bushi’ marker, the group of figures on the round base in the foreground is an order marker, here signifying ‘move.’ The old coloured counters have all been replaced by these figure markers, which is aesthetically better but not as good in function. The game uses a lot of markers…. 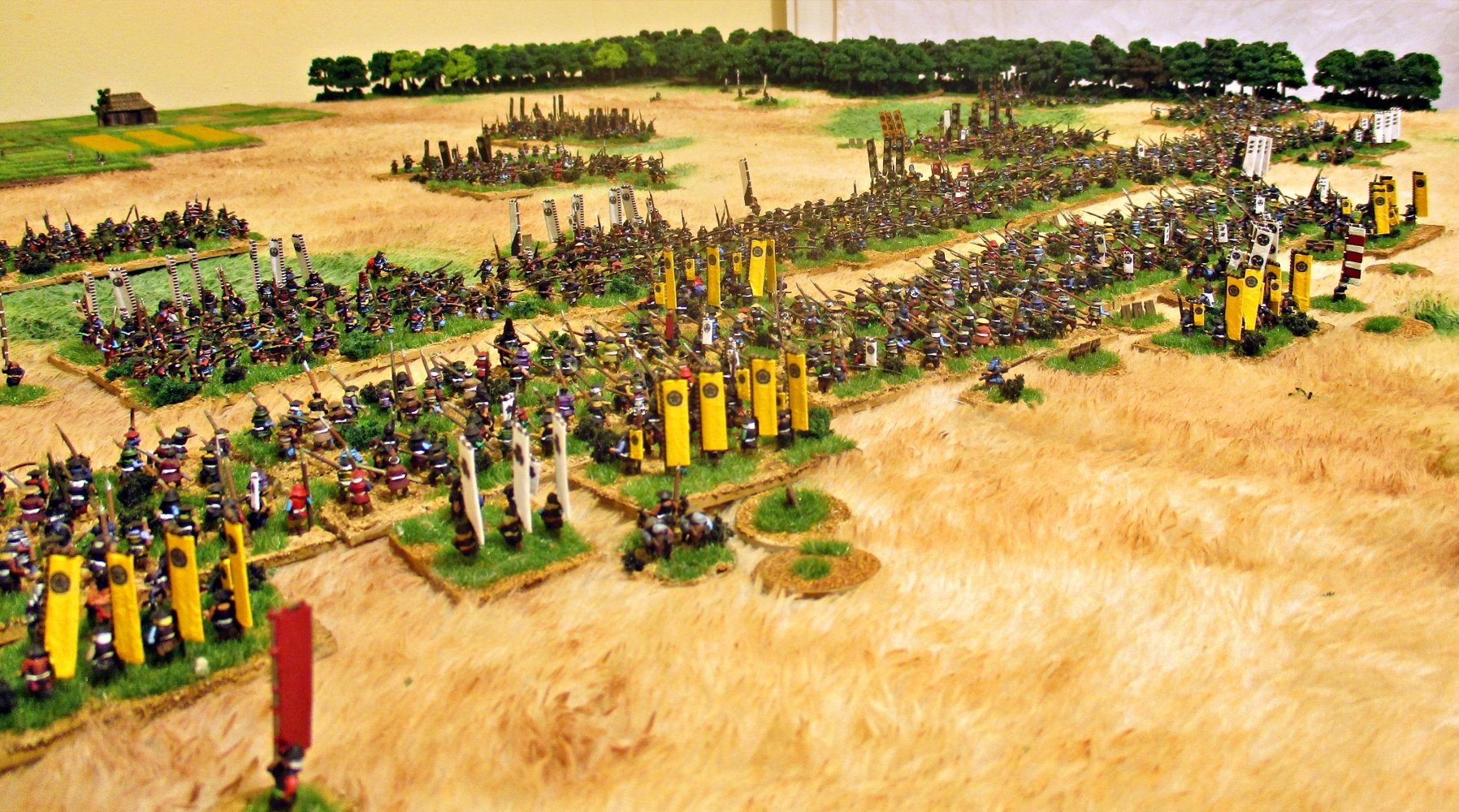 Nobunaga wins the race. Despite having one of his commands virtually annihilated by Shibata, Nobunaga and Mori Yoshinari break through the Shibata centre precipating a rout. Shibata Katsuie can be seen in the background trying to turn about to join the fight in the centre, but too late. 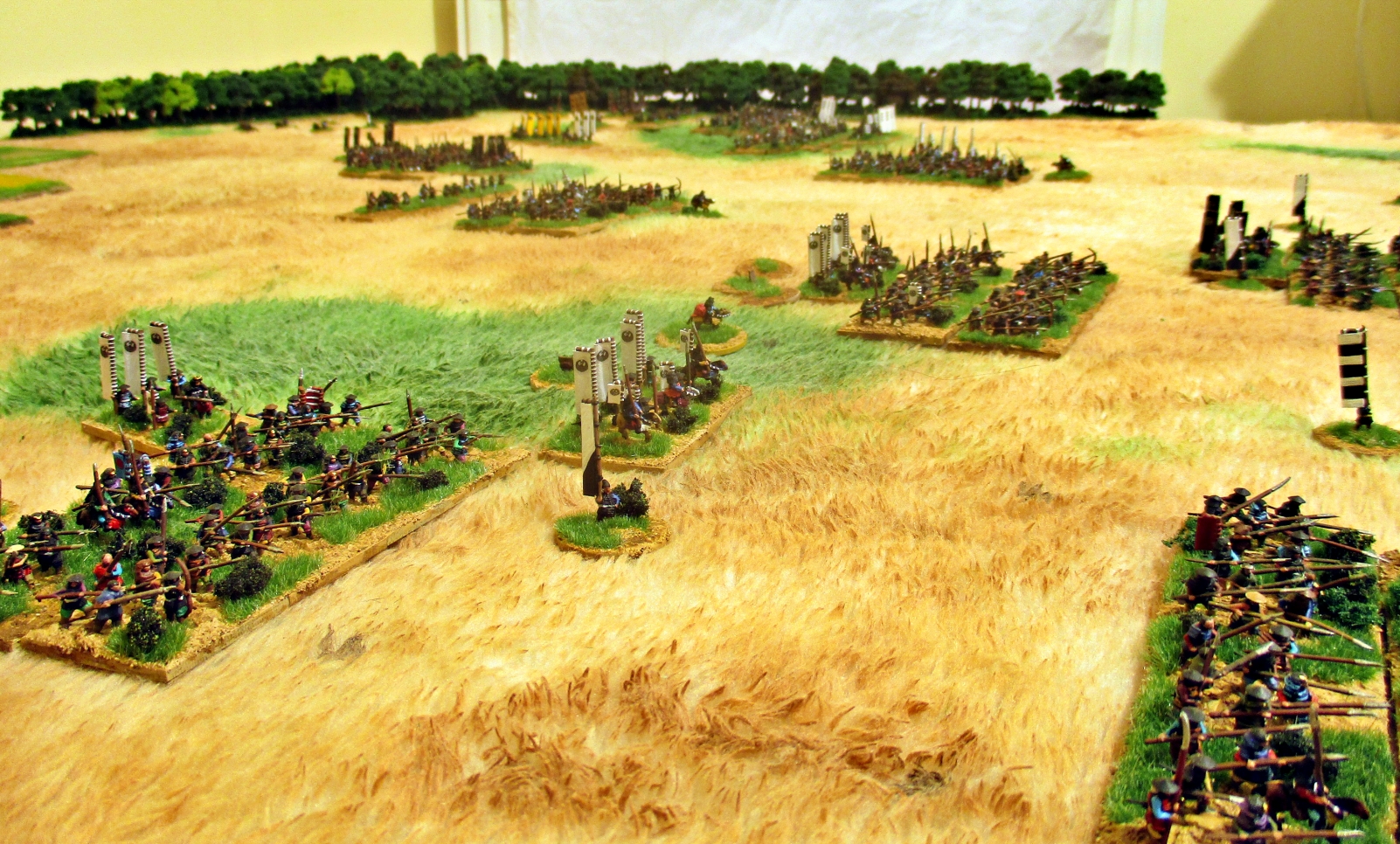 The game went surprisingly well, considering it was really just a rules test, ending in a narrow win for Nobunaga, with some casualties to take into the next game against the Hayashi. I think the rules are working better now, and the ‘V2’ version is now in the downloads section.