Previously I talked about starting a 6mm Sengoku Jidai project. Now that things have progressed I thought I’d talk a bit about progress with the figures, some thoughts on rules and also some terrain.

There aren’t that many rulesets specifically for samurai and those that exist all have, in my opinion, a fatal flaw. They all group troop types together into units of samurai, cavalry, ashigaru spears, guns etc. From what I can gather from the warfare of the time, and I’m thinking specifically of 1560-1590, any group of more than a few hundred men at most would be composed of a mix of troop types and weapons. The traditional way of representing samurai armies in wargames rules doesn’t reflect this. So my initial idea of using a modified version of Peter Pig’s ‘Battles in the Age of War,’ has taken second place to creating a new set based on the ‘engine’ of the ‘Pulse of Battle’ rules. Early days yet, however.

You may have to ‘Right-click’ the photos and open them in a new tab to see the full version.

I’ve now got around 80 bases done, and I’m looking at initially having 6 bases per ‘unit.’ Ultimately I’d like to go to 12 bases per unit, but that’s a long time in the future. I reckon I can play the first games with 4-base units to get the rules together. 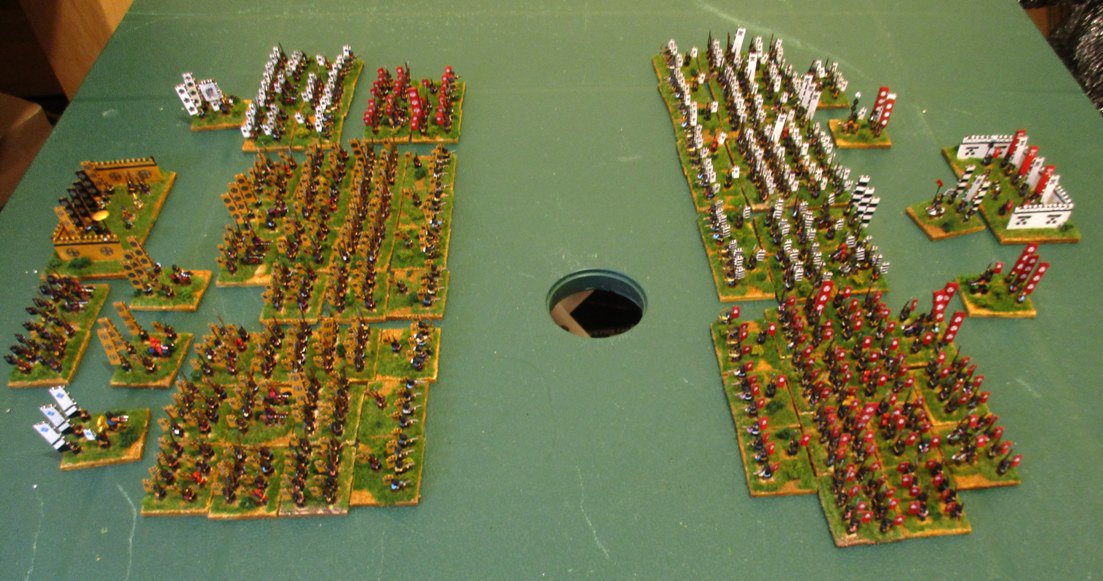 Oda clan on the left, Mori on the right 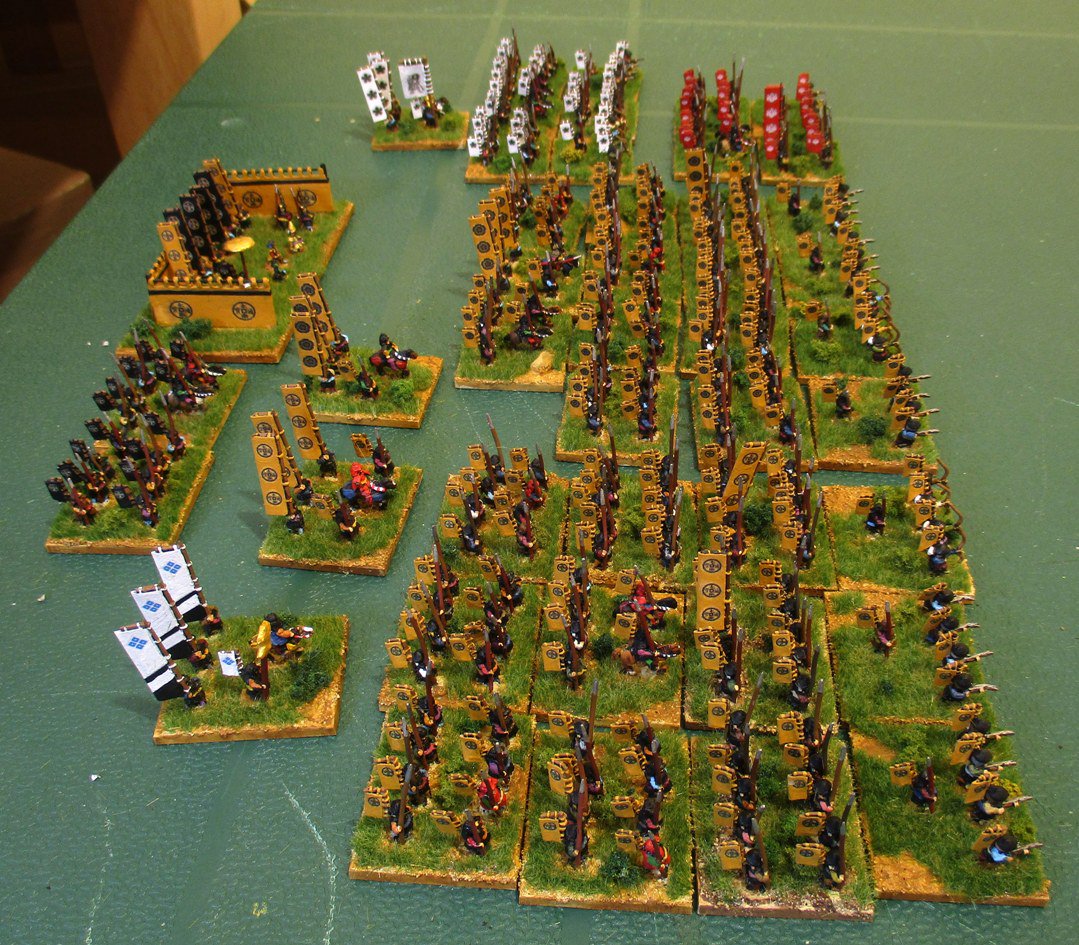 The Oda. Oda Nobunaga in his honjin. In the background is Maeda Toshiie with his huge ‘Shoki’ banner. In the foreground with the 4 blue diamonds mon is Sassa Narimasa. 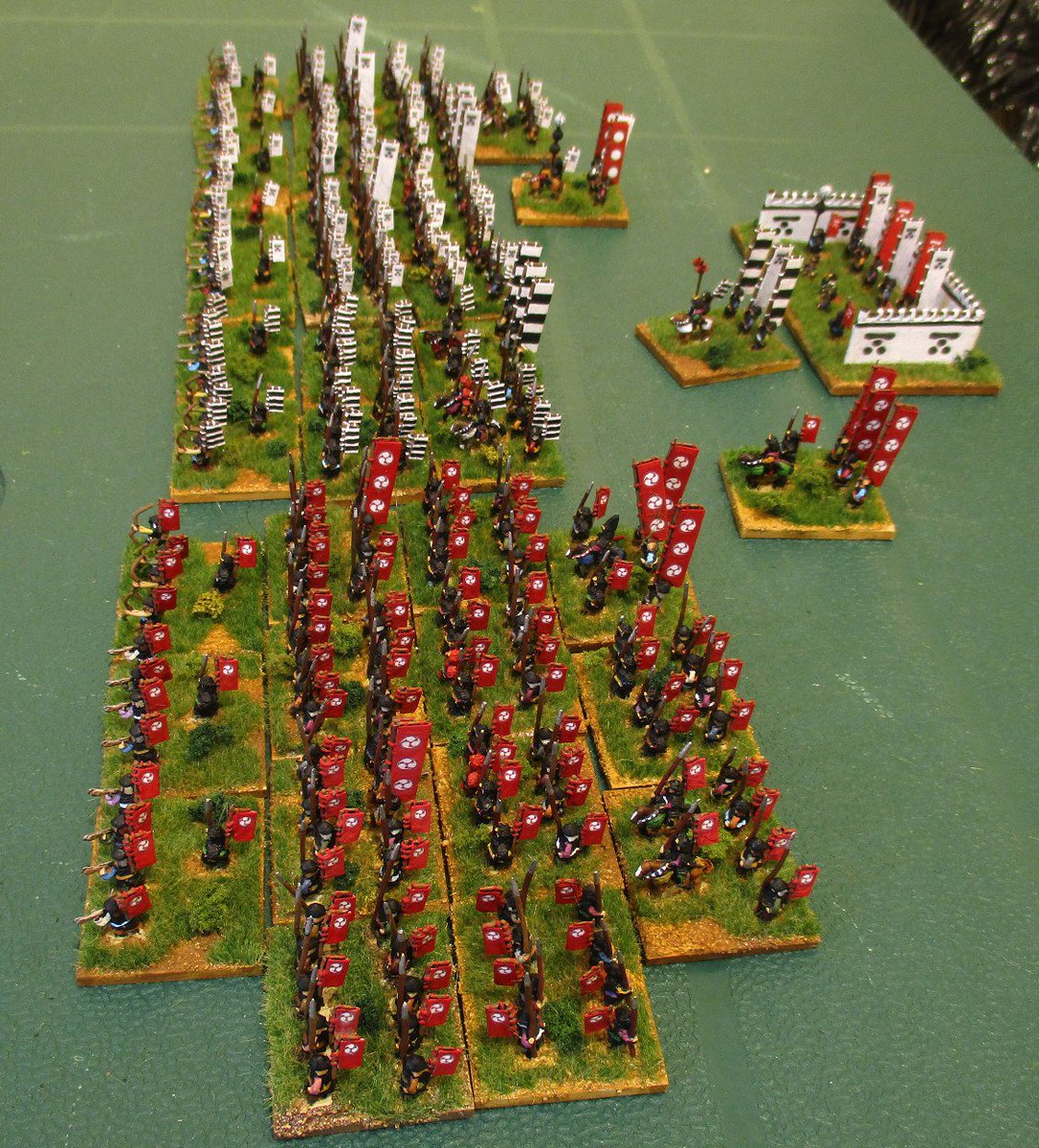 The Mori. Mori Terumoto in his honjin. With, from the top, Mori, Kikkawa and Kobayakawa clans. 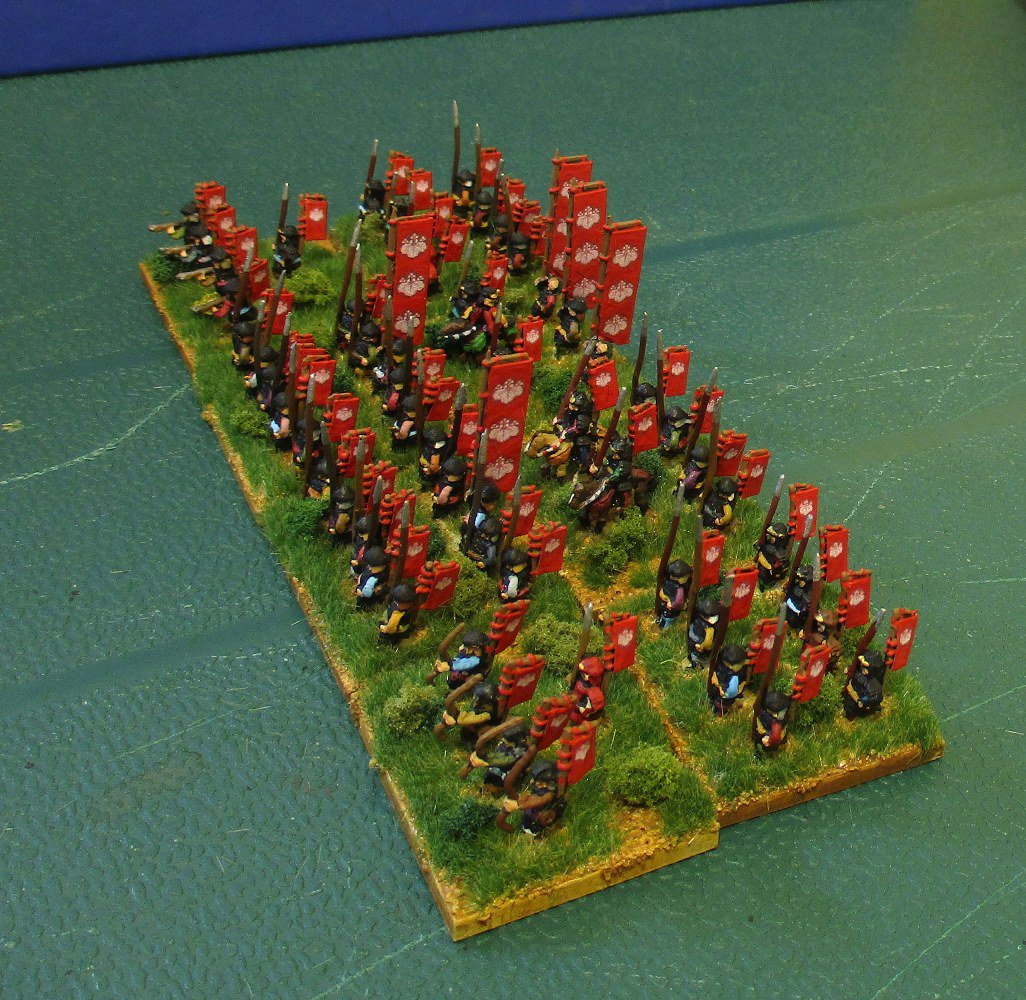 Many  Japanese battles of the time have quite a lot of forested areas on the battlefield, so I’d need to do a fair number of trees. I thought about various ways of basing them, but in the end settled on square bases. This was the usual question of aesthetics versus utility, square bases would fit together better to make large wooded areas, and I thought I could create irregular edges within the square bases. I’m thinking ultimately of a grid-based set of rules, so this allows for the creation of proper dense wooded bases. If troops move through them, the base can be taken off and replaced by a few clumps of trees without losing the position of the woods.

First thing was to get some trees.  A trawl on E-bay turned up a company in China with the wonderful name of ‘WeHonest.’ I ordered 300 trees at a very reasonable price and a few weeks later, good to their implied word, the trees from WeHonest arrived. The trees are a uniform green, and quite a bright green too, so I went about the process of dying them. This was a pretty simple matter of cutting a Vallejo pot in half and pouring a small amount of PVA, some green paint and some water to fill it up. Trees were then dipped in the pot, shaken off in a larger jar and placed on a grid to dry. As you go along, you can add different colours of green and brown to top up the paint in the little pot to get a variety of colours. Once the trees were dry I painted the trunks various browns and greys. 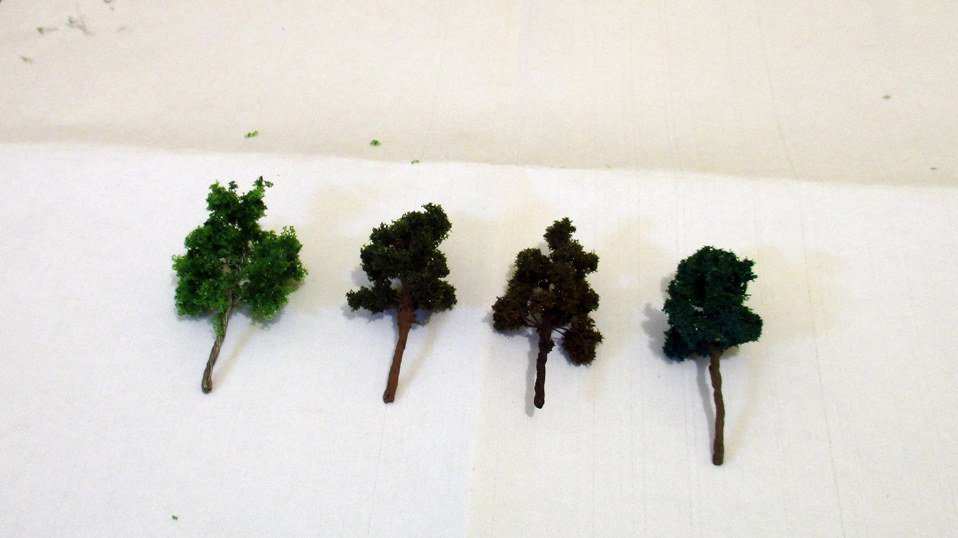 On the left, the ‘raw’ tree. Then the trees with various colourings

For the tree bases, I used 10cm square mdf, with some ‘half bases’ of 5cm x 10cm. First a coating of glue was applied and sand sprinkled on, then this was painted in a similar colour to the figures bases. Finally a layer of 2mm static grass was applied with an applicator. Again, I’d recommend using a static applicator for 6mm, even 2mm grass looks too messy otherwise if just sprinkled on in my opinion. 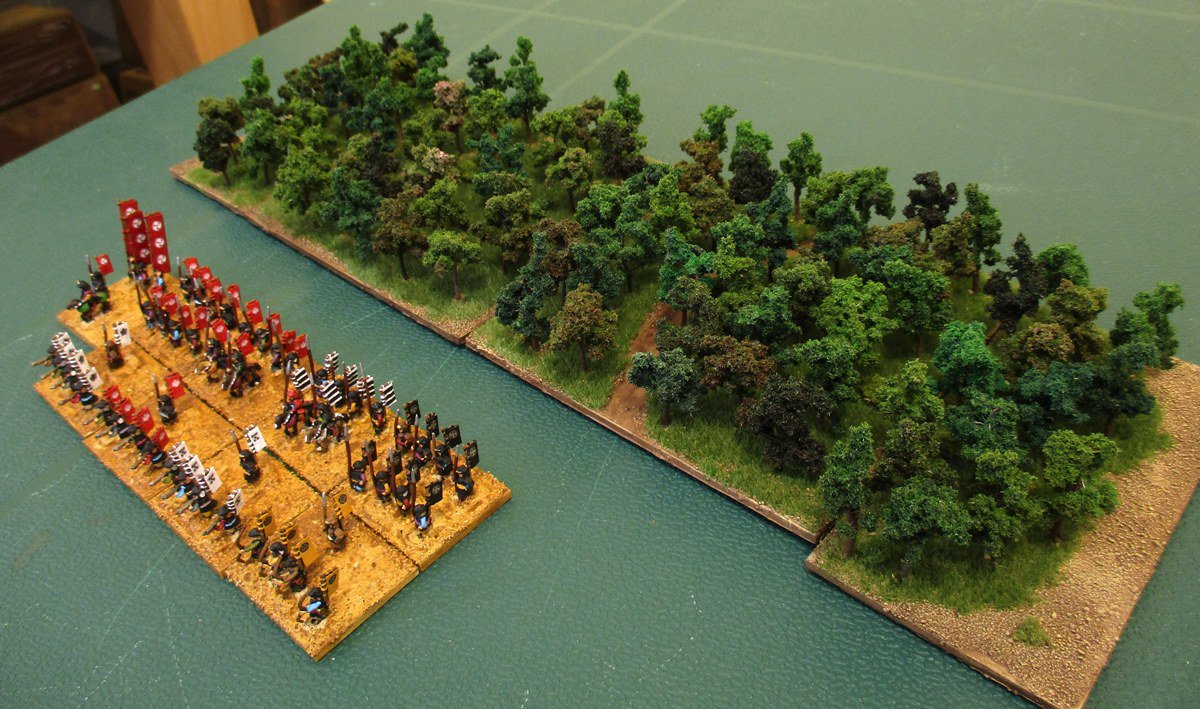 The tree bases finished. One base has a track running through it.

The time-consuming part involved drilling holes in the base and gluing the trees in. I did this one at a time to get the spacing right. The first time I tried to drill all the holes in one go and guess the spacing, but this wasn’t very successful.

For our 6mm Napoleonic and WW2 games, we break up the table a bit with fields. These are purely decorative and can be moved out of the way as figures move during the game. It adds a bit more interest to an otherwise plain table. For the Sengoku, I thought that the fields might also be used as ‘real’ terrain, so I again went for standard 10cm square bases. I did two types of fields, ‘normal’ ones and rice paddies.

For the normal crop fields the bases were first given a coat of glue and sand. Then the paths/banks between the fields were created with a second layer of glue and sand. Finally it was just a case of using various colours and lengths of static grass to create the fields. The surrounding banks were made with the same colour of 2mm static grass as the forests and the figure bases. 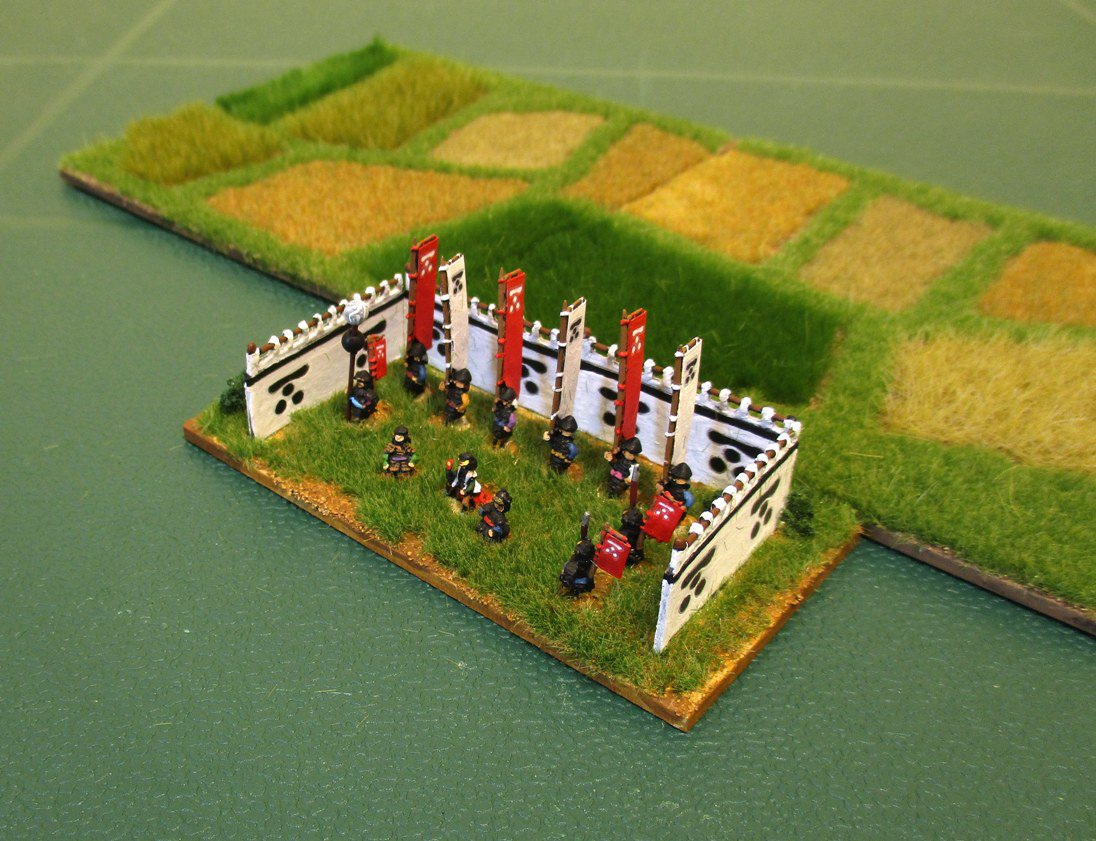 For the paddy fields, first some GHQ Vietnamese civilians were glued on the base, then the banks surrounding the fields were made with glue and sand, then the base was painted, with the paddies given a darker wash. Each paddy field was then given a coat of PVA, which thankfully dried clear, and then a couple of coats of gloss varnish. I don’t know how much ‘depth’ the PVA added at this scale, I was really just making it up as I went along. Once all that was dry, the fields and banks were ‘grassed,’ the paddies themselves given small blobs of glue in lines to give the impression of rice growing.

Rice paddies. The GHQ civilians are very slender compared to the Baccus figures, but these were the only thing I could find for Japanese civilians.

There’s really only one place to go for 6mm Japanese buildings, and I mean that literally. Mura Miniatures has a good range of village and town houses. There’s usually a bit of a wait to get them as the guy who makes them does them in his spare time, but they are worth the wait. I’ve only done 1 village base so far, I must get around to having a good look on the internet to make a list of village details and ‘clutter’ I can use (and that I can make, what’s possible is always a consideration at this scale) in order to make the village look more ‘lived in.’ For this base, I used 3 buildings, some more of the GHQ Vietnamese civilians, and added a couple of boxes, a vegetable plot and a couple of trees. 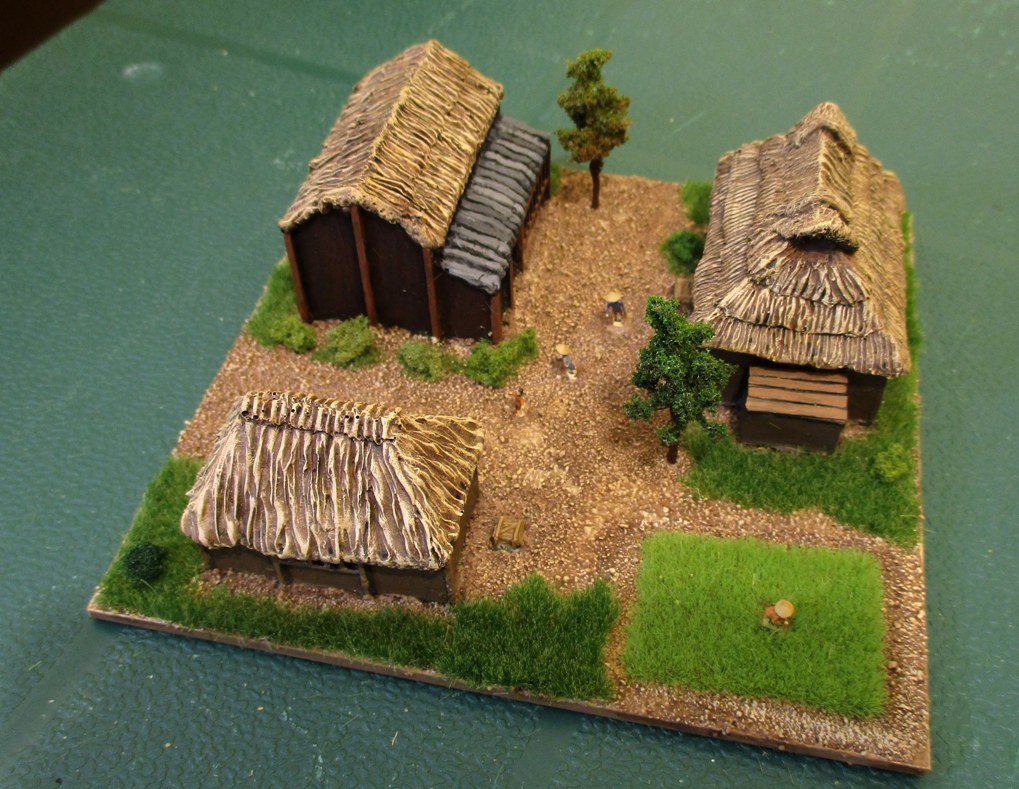 And the various terrain elements together: