A few years ago I started a large Sengoku-Jidai project in 15mm. I decided to organise them for Peter Pig’s ‘Battles in the Age of War’ rules, but using 5 figures per base instead of 3. This meant that the number of figures needed increased massively and has left the project still some ways from having enough for a decent sized game. So, given my recent Damascene conversion to all things 6mm, I decided to have a look at doing the Sengoku Jidai in 6mm.

This is a bit of a no-brainer. It’s Baccus or Irregular. I think 6mm figures have moved on a bit from Irregular, so Baccus it was. Baccus’ range covers the main troop types for the era, certainly enough for 6mm, and has a bit of extra stuff like command figures and a honjin. One huge bonus is that you can order as many nobori banners as you like, well up to 25% anyway. Getting enough nobori was an expensive business in 15mm, with Baccus this isn’t a problem. As a decent amount of nobori banners was likely to be a key part of the ‘impact’ of units, this was a good thing. 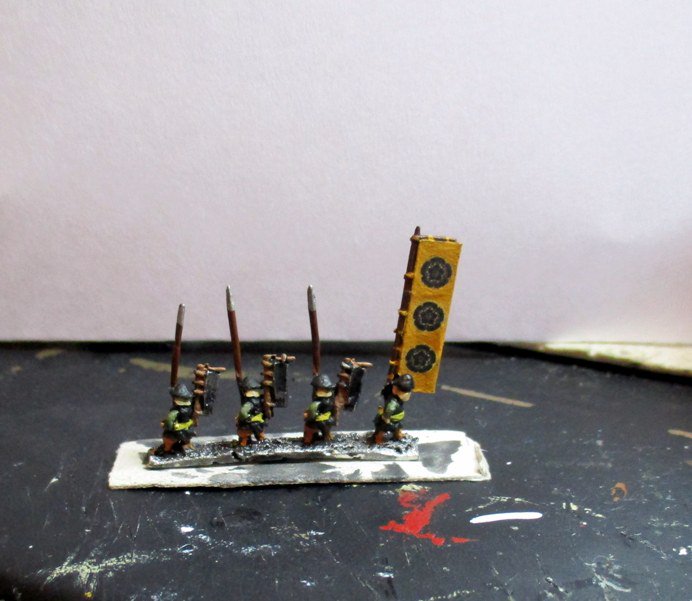 Ashigaru strip with nobori. Subsequently I found it easier to clip the figure off the strip and glue them onto a longer painting base. It also made it easier to take off single figures to assemble units.

I started off with some ashigaru with long spear. The first thing to decide was what not to paint. Now, it’s possible to paint 6mm figures as if they were small 15mm figures, but then you’re not taking advantage of one of the main reasons for doing 6mm: speed of painting. The basic philosophy of painting 6mm is that you’re painting a unit not a group of individuals. So, the ashigaru would be wearing mostly black armour with variously coloured clothing. I wasn’t going to paint lacing on the armour so this was going to be plain black (or red or russet). The clothing should be: shirt, belt, trousers, leggings and socks. I figured the socks were unnecessary and there wasn’t much point in having a separate legging colour as this really wouldn’t stand out. So the clothing went down to 3 colours: shirt, belt and trousers. I wanted to have a non-uniformed appearance, so I thought I’d do groups of 6 strips (24 figures) and then, after I’d finished a few groups, take some figures from each and do the sashimono.
The painting sequence (on a black undercoat) went:

2nd and 3rd colours repeated as above so the 3 colours are distributed across the 3 clothing areas.

Paint the yari shaft. Because I was going to take figures from different painted groups to make up bases, I decided against getting too outlandish with lacquered spears, otherwise the brightly coloured ones may stand out too much. Ashigaru would have brown yari, samurai would probably get a red-brown to red colour.

Paint the sashimono wooden frame. Again, I thought I’d stick with the same colour throughout here. When I did the sashimono there may be some touching up needed, so it would be easier to stick to one colour.

Paint the flesh, then the cloth neckguard.

Go over the black armour again, touching up where necessary. I put a black stripe in for the shin guards, and initially put in black dots and squares for the arm armour. I felt this was putting too much black on the figure, so I left these off the arms on subsequent figures. This is one of those areas where painting 6mm differs from other scales. It’s much more ‘impressionistic.’

Finally paint the spearheads. Once they’re dry, I usually give the flesh areas a bit of a brown wash to bring out the detail a bit.

Sashimono are where the viability of 6mm samurai would stand or fall for me. I wanted to be able to distinguish units by their sashimono and/or nobori banners. There were a number of possible approaches:
1. Paint the sashimono plain colours and have enough nobori with mon decals to distinguish the unit
2. Paint an impression of the design on the sashimono (e.g. the Oda coin mon would be a hollow circle, the cinquefoil mon would be a filled circle) and use decals on the nobori.
3. Use decals on sashimono and nobori.

I really wanted the sashimono to have the mon with as much detail as possible, so this would mean using decals. Now, this was going to be a fiddly business, but I made some tiny mon images and printed them out on paper to check the size. This is where I had the breakthrough/brainwave that made the whole thing viable. While sizing the paper sample, I thought: ‘why not just print the sashimono on paper and stick them over the sashimono?’

This served many purposes. It equalised the size of the cast sashimono, overcame problems of miscasting and the uneven surfaces which would make decals difficult. It meant that I wouldn’t have to be organised enough to print a whole bunch of decals without leaving any out. Most importantly it meant that I could do the sashimono and nobori in a fraction of the time. I made new images of 2 mon side by side. These would be carefully cut out and folded in half, then wrapped around the sashimono so there would be a mon on each side. The pieces of paper involved are 6mm x 5mm, so, while small, are still bigger than 15mm decals. I printed the images out in a slightly darker colour, then painted the field on the paper, and the fastening ties on the figure, in the normal colour. 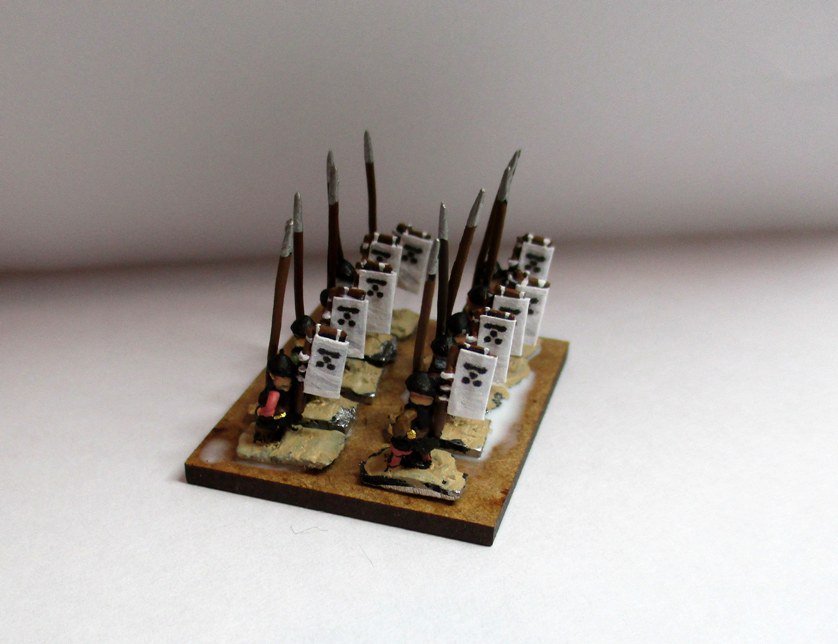 Sashimono attached and figures based ready for texturing and grass. The Baccus bases are quite thick, and there’s not much room between them, so the texturing is a bit fiddly.

I went for 30mm x 25mm bases, and took inspiration from the reconstruction of the Kawanakajima screen showing a collection of small units under a clan leader. This is nicely reconstructed by both forum user ‘Evalerio’ here, and in the book ‘Die Samurai der Sengoku-Zeit’ part 1 by Till Weber. Ashigaru with yari are in 2 ranks of 5. Samurai are in 2 ranks of 4 to simulate a looser formation, the back rank being ashigaru. Cavalry bases are 2 mounted samurai with 4 ashigaru followers. Bows and guns are 4 archers/gunners with a samurai officer stood behind. Nobori are distributed throughout the unit with 3 on the command base. 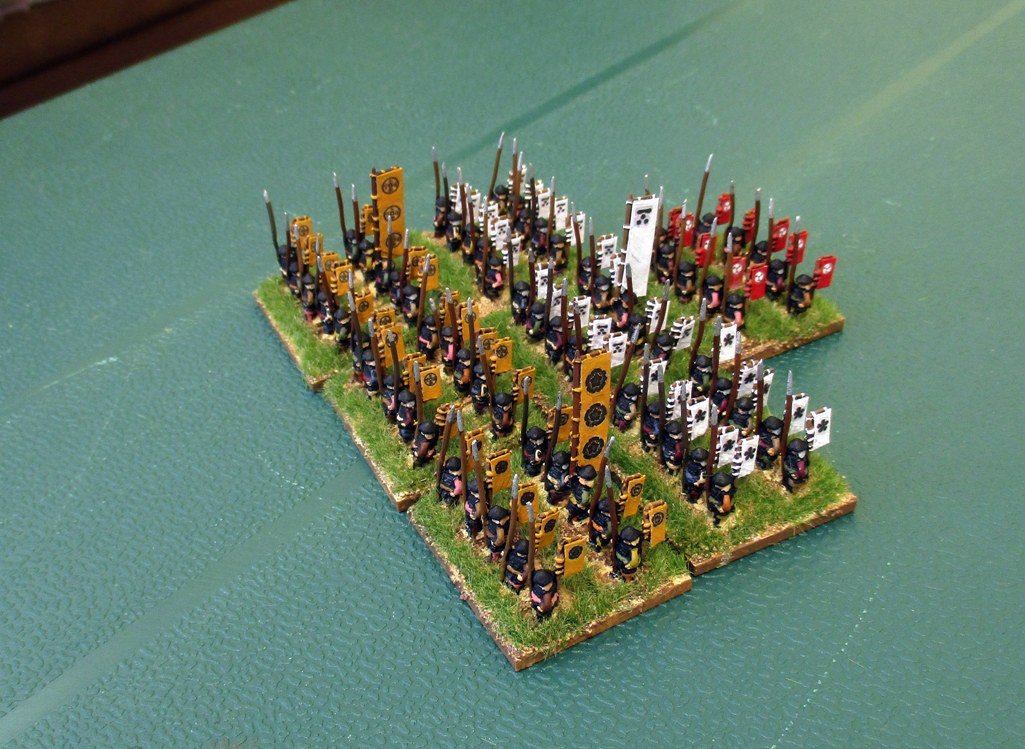 Some ashigaru bases from Oda, Mori, Kobayakawa and Maeda clans. 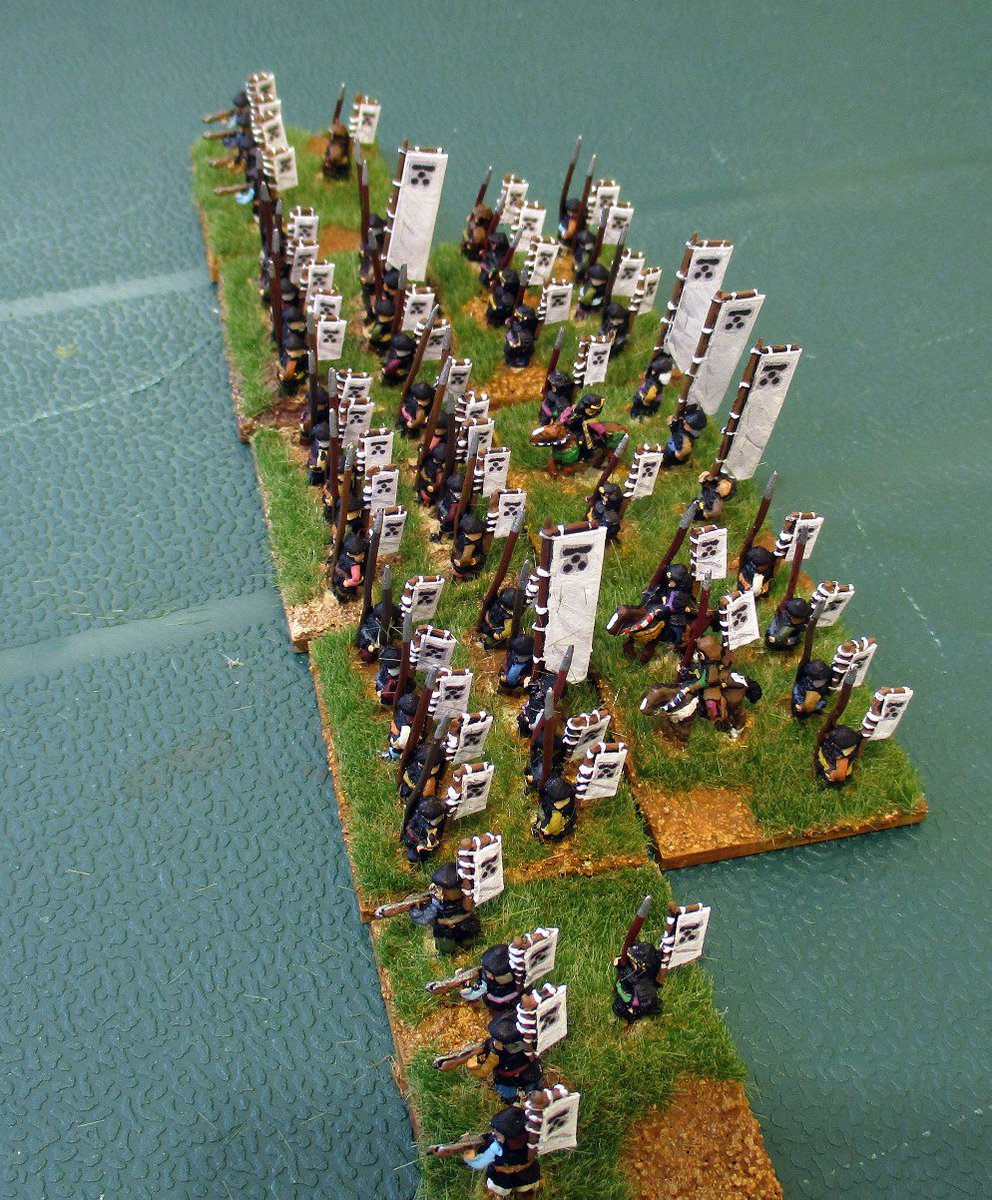