I’ve returned to the campaign being generated by the board game ‘A Most Dangerous Time,’ which I wrote a bit about here. This time it was the Battle of Shōryūjijō. It is 1571 and Hosokawa Fujitaka is besieged in his castle of Shōryūjijō by the Miyoshi under Miyoshi Nagayasu. An Oda force under Takigawa Kazumasu marches south from Kyō to relieve the siege. The Miyoshi are in a difficult spot as their supply line had been cut by Oda Nobunaga’s successful re-taking of the fortress at Ibaraki from the ikkō-shū. The battle was fought as usual with my own ‘Tenka Fubu’ rules, and provided a handy excuse to get my fort on the table for its first game.

I gave the Miyoshi a lower break-point to simulate their low supplies, but I made their troops slightly better in terms of cohesion than the Oda as Takigawa’s army had been taken from around Owari and Minō, and most of their more prominent lords were in Nobunaga’s army.

The initial positions. The Miyoshi are represented mostly by white banners and sashimono, the Oda are a mix of actual Oda yellow and black, and various in red: 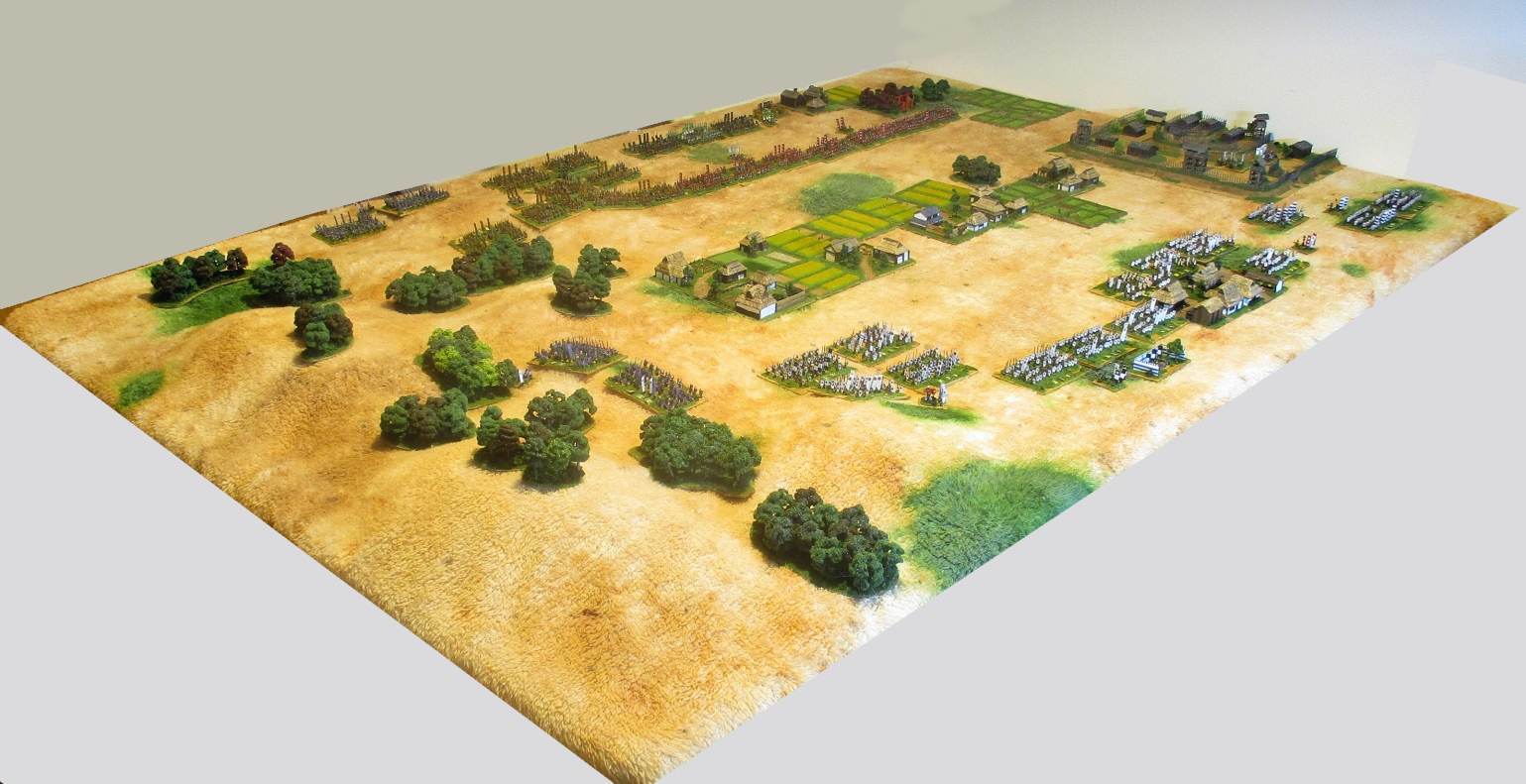 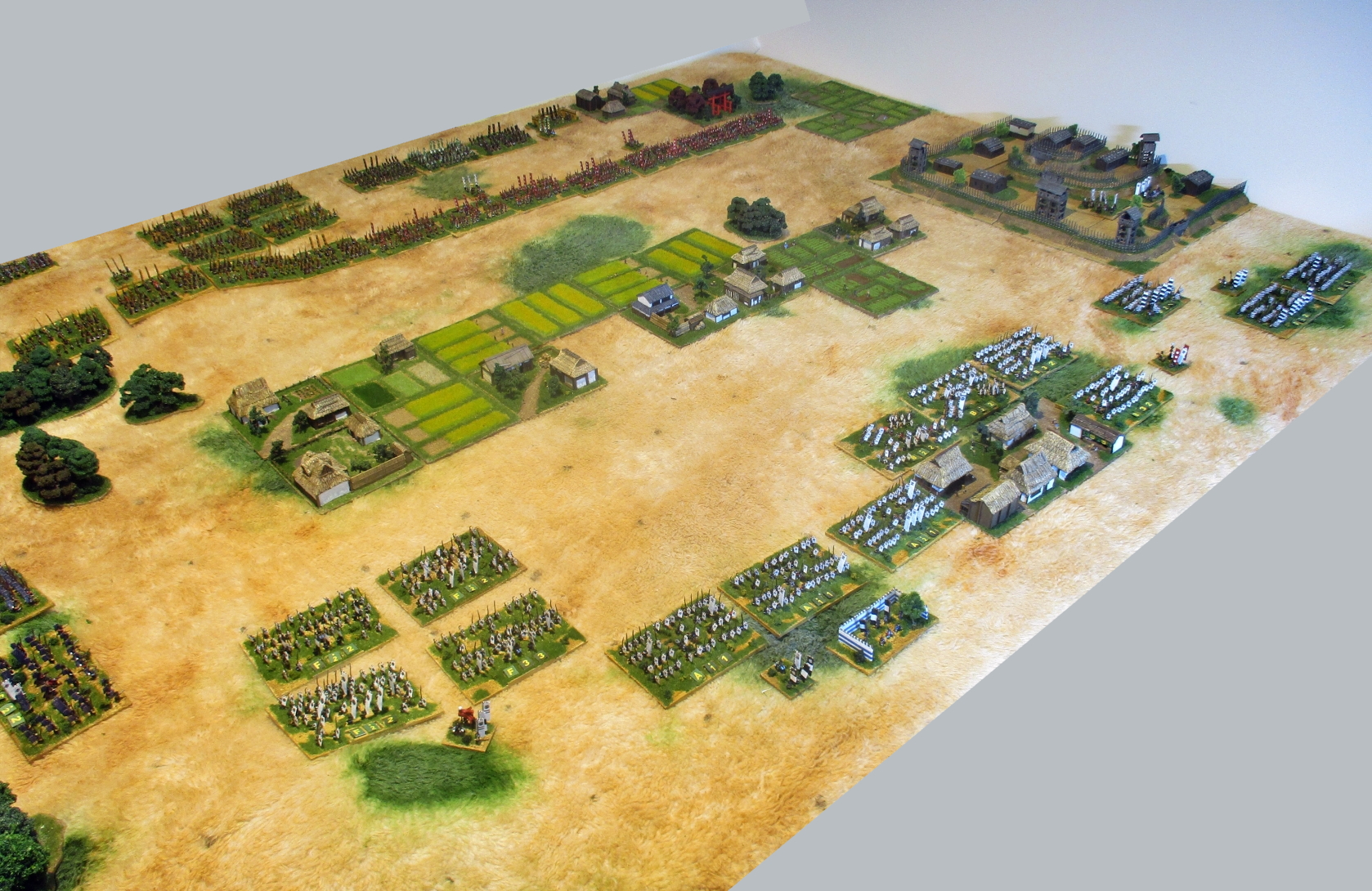 The Miyoshi have a small shū in the trees on their left, intending to threaten the advancing Oda flank. For their part, the Oda send a flanking force on their right wing to find a path through the wooded hills to attack the Miyoshi flank.

The battle begins with the Miyoshi flankers (blue) engaging the advancing Oda: 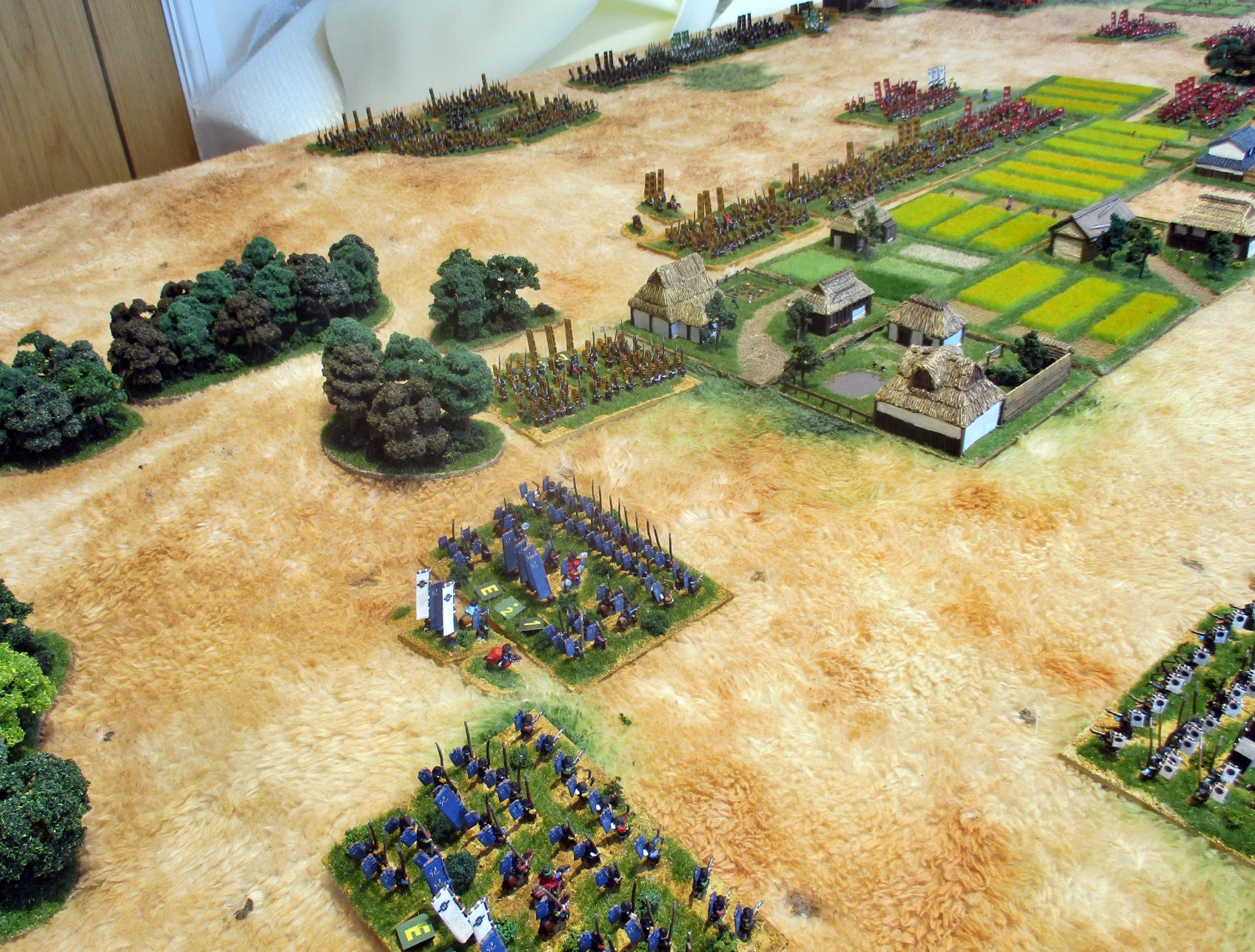 The Miyoshi rout the Oda and pursue. 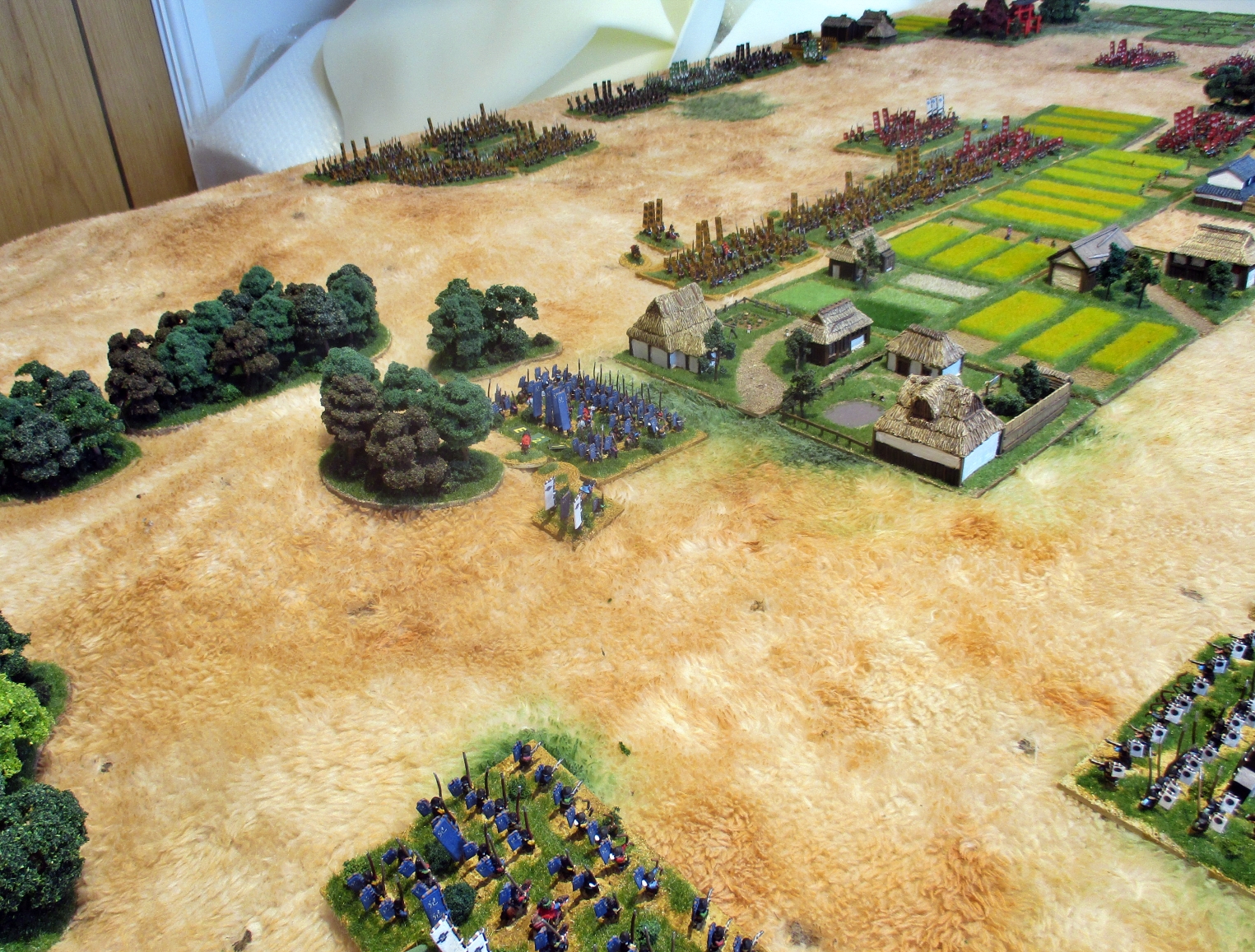 However the attack loses mommentum and is unsupported. A reserve Oda shū attacks in support. 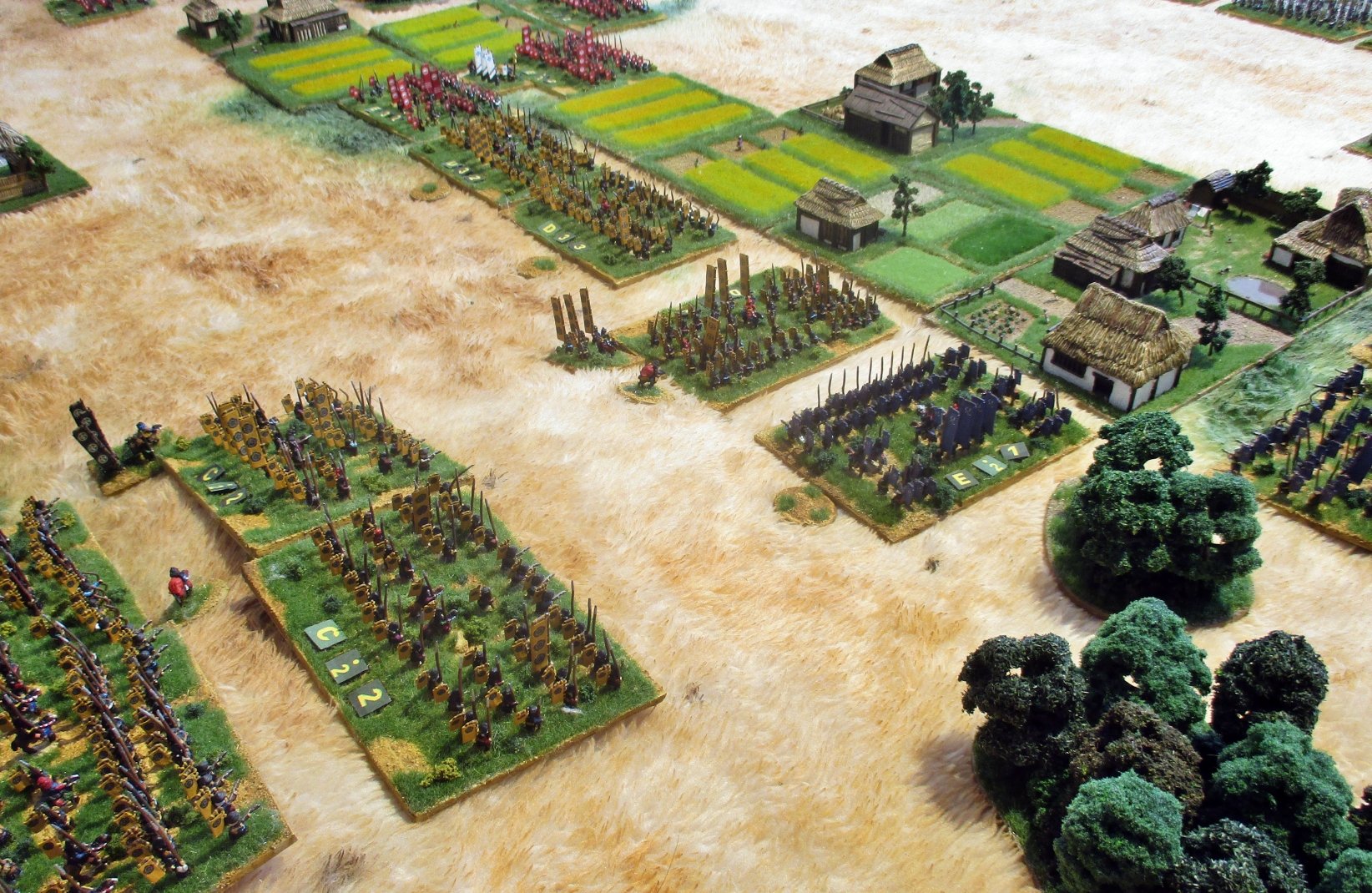 The Miyoshi are driven off, and the rest of the shū regroups. The Oda flank marchers (light blue) have arrived, but only in time to be caught in a general Miyoshi advance. 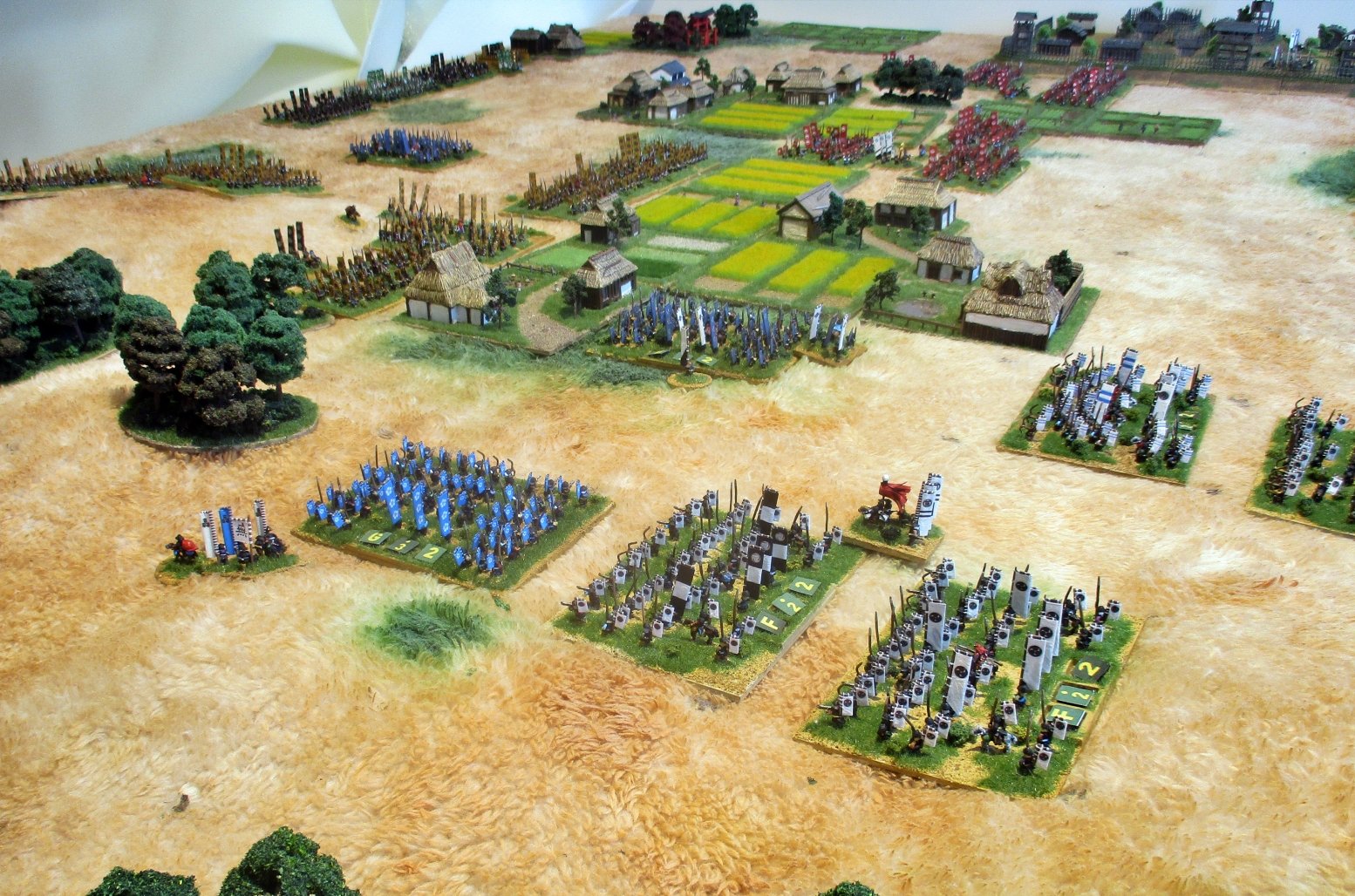 Fighting becomes general on the Miyoshi left. The original ambushers withdraw to regroup and form a new reserve. The Miyoshi will try and recycle their units to offset the Oda numerical advantage. 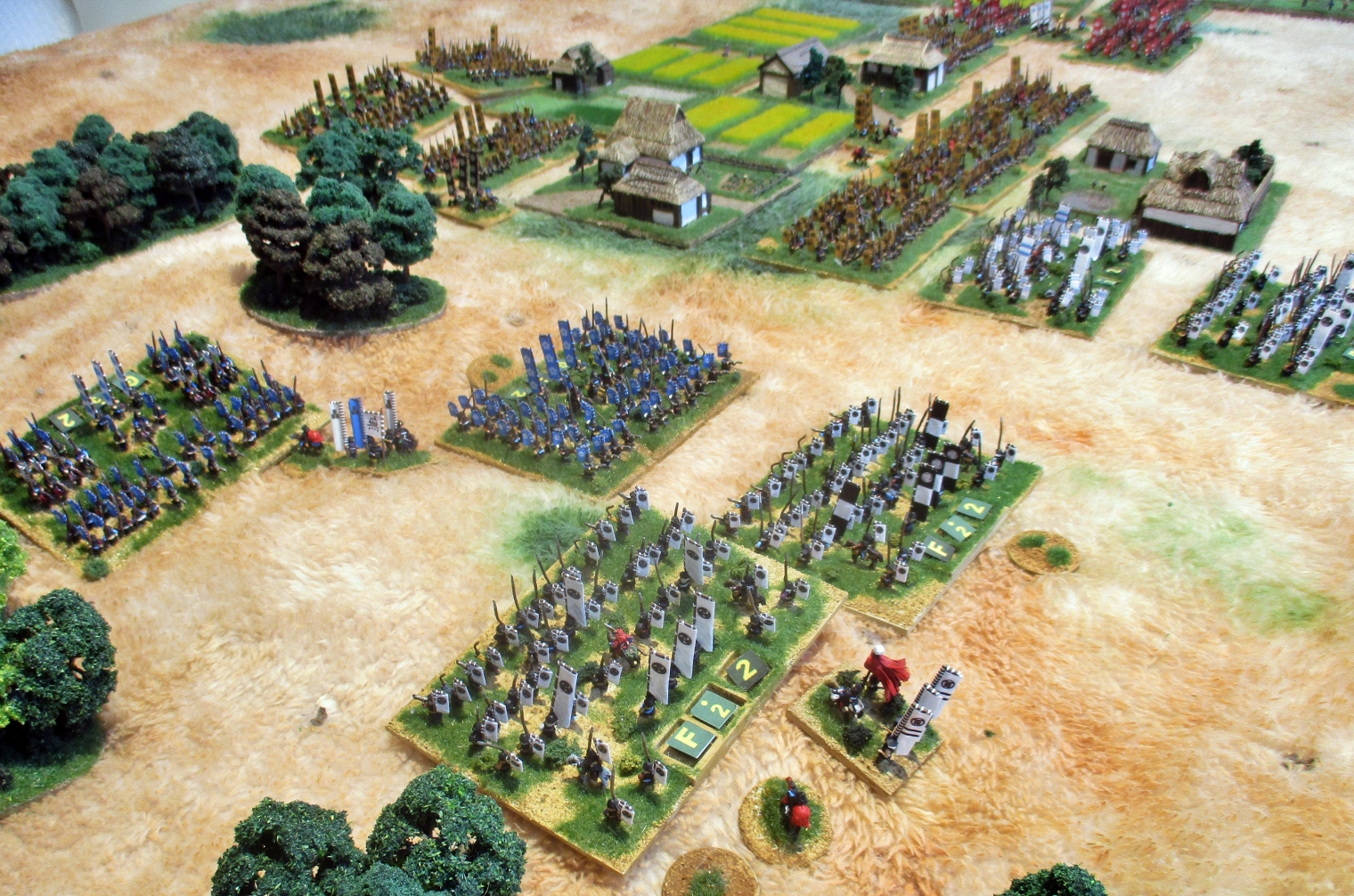 On the other flank, the Oda advance reaches the fort. 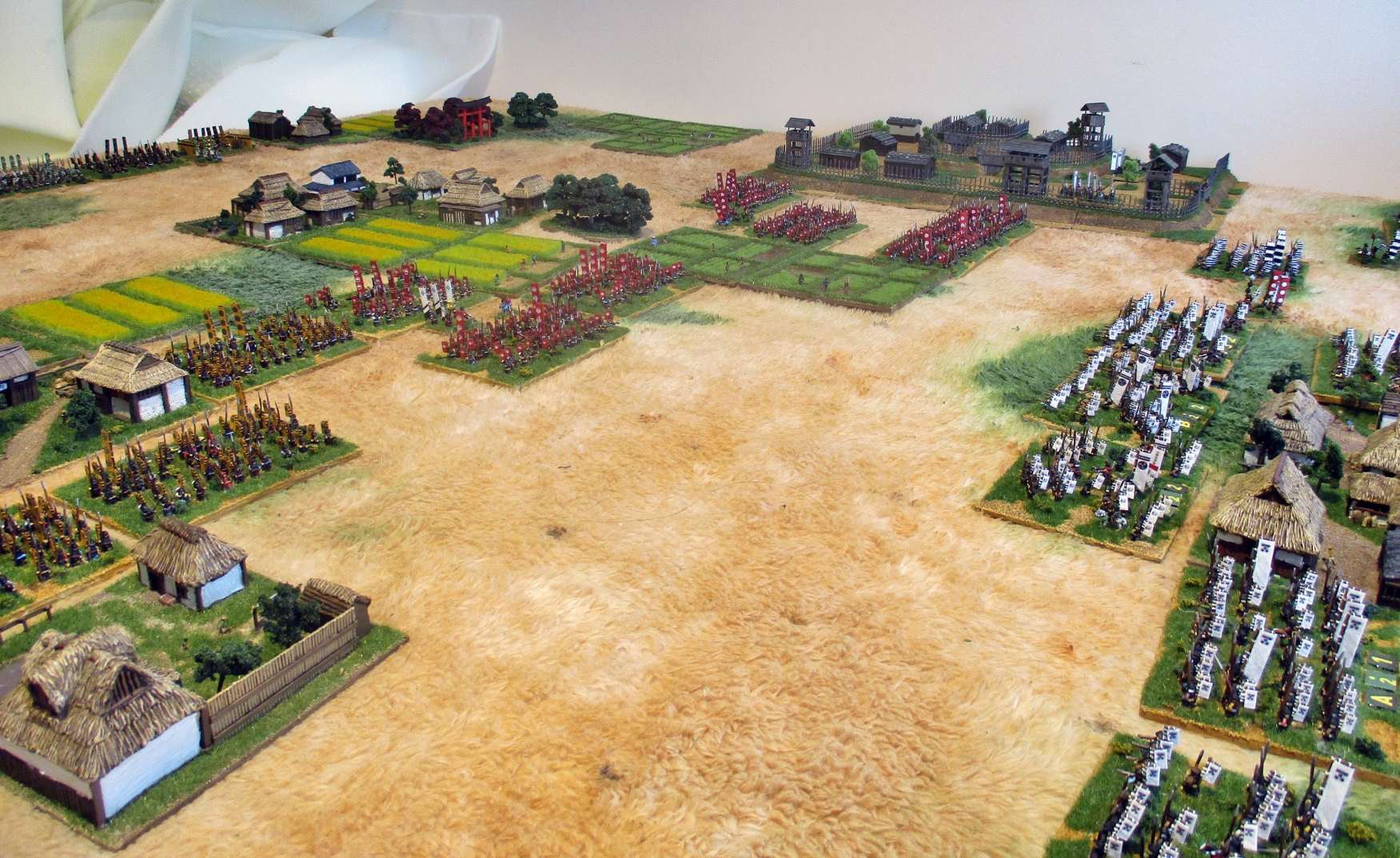 The Oda flank marchers are defeated by the Miyoshi. While the battle is going well on their left, the attritional fighting is more dangerous to the Miyoshi than the Oda. 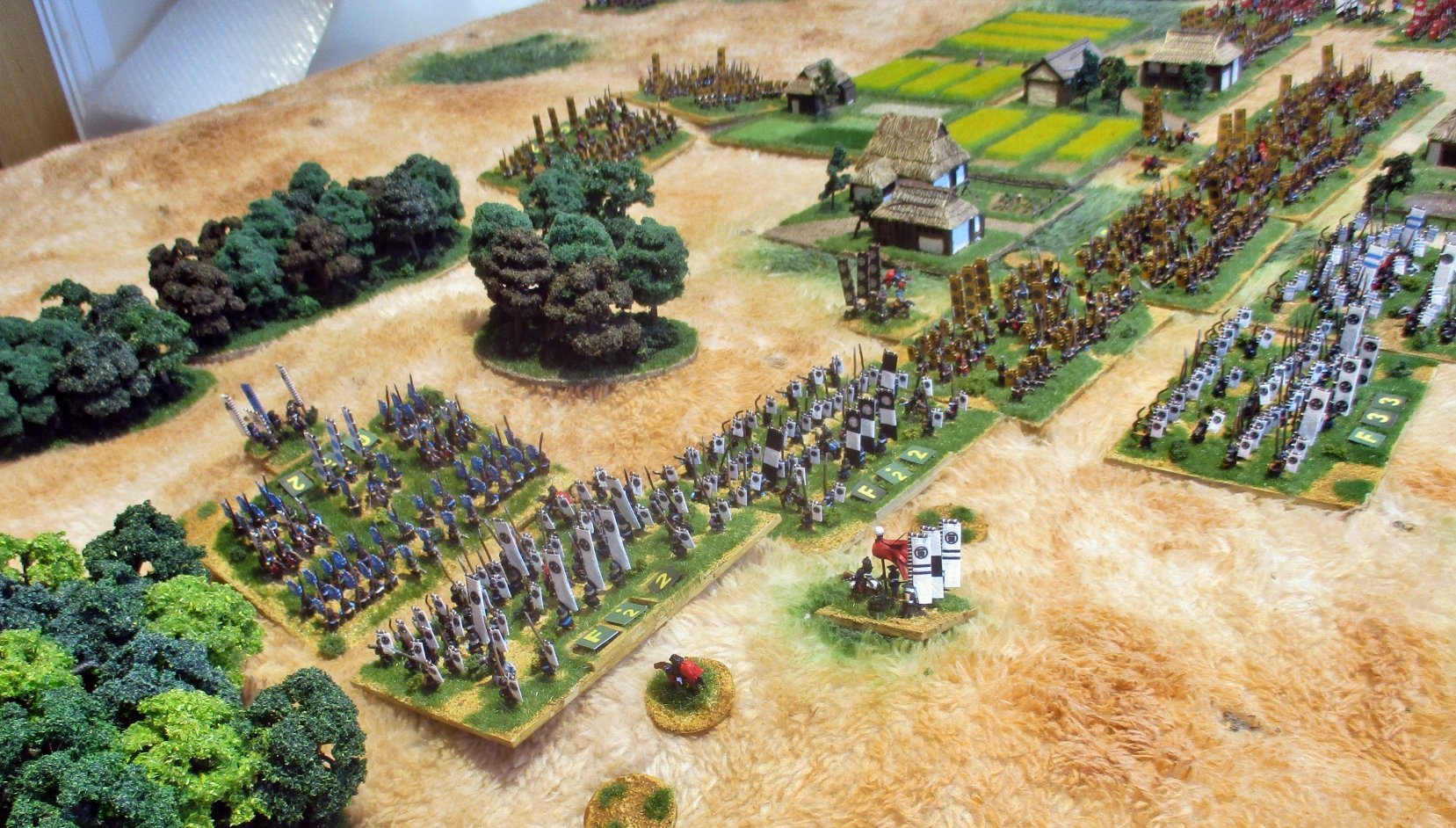 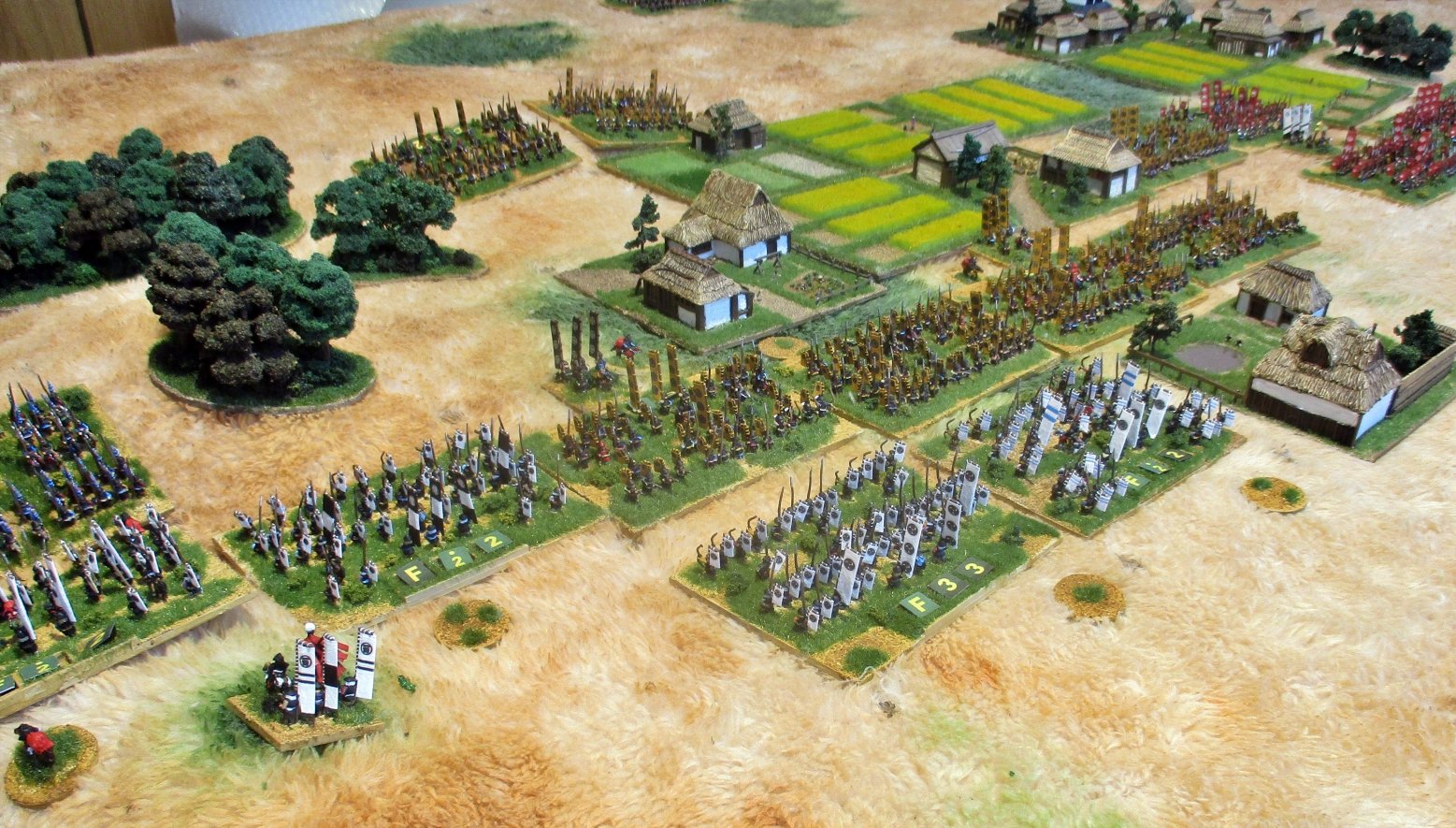 Fighting begins on the other flank: 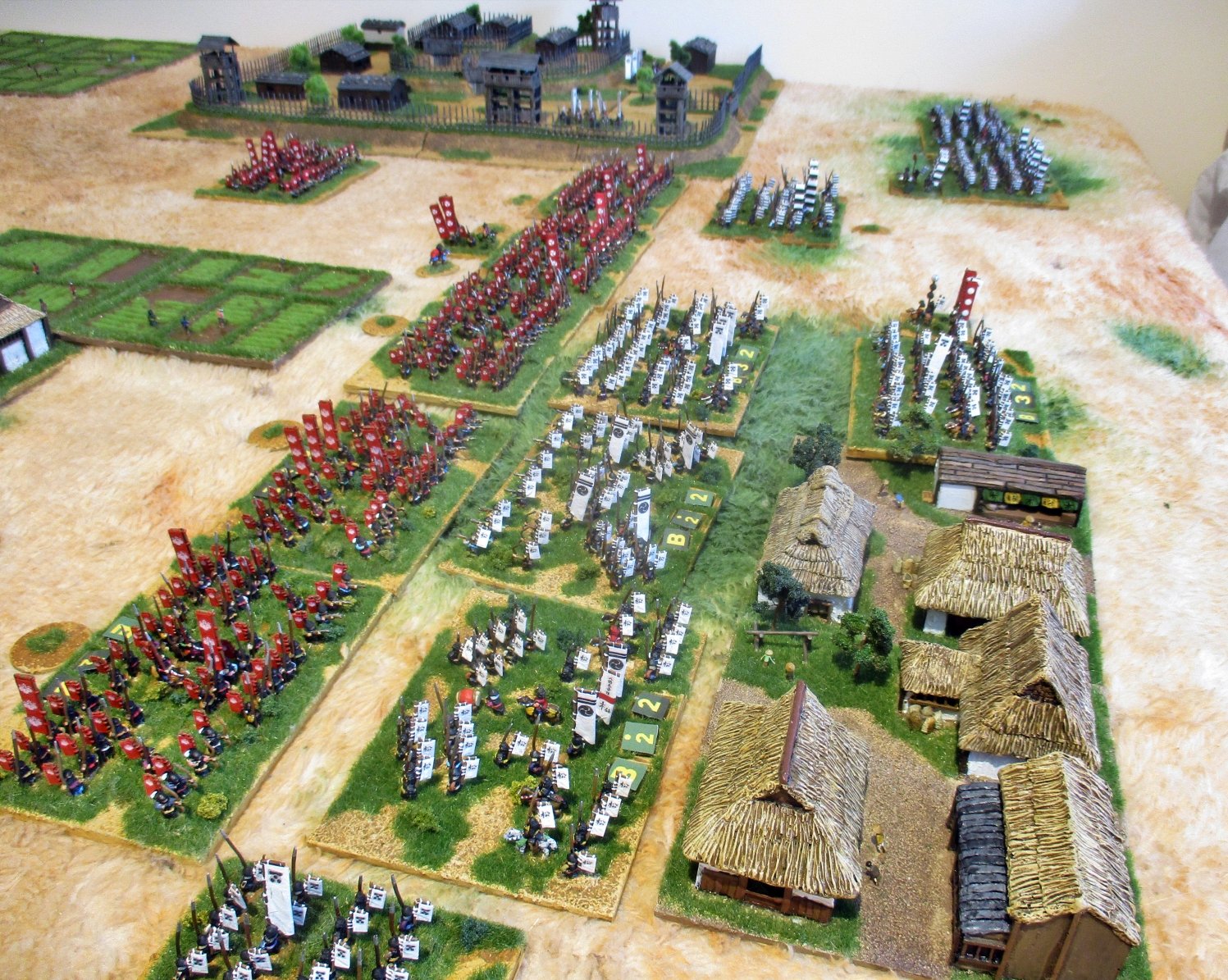 View from the Oda side. An ominous gap has opened in the Miyoshi left. Miyoshi Nagayasu leaves his honjin and leads his own shū forward. Takigawa Kazumasu does the same. Both commanders trade control of the battle to lead their own reserves. 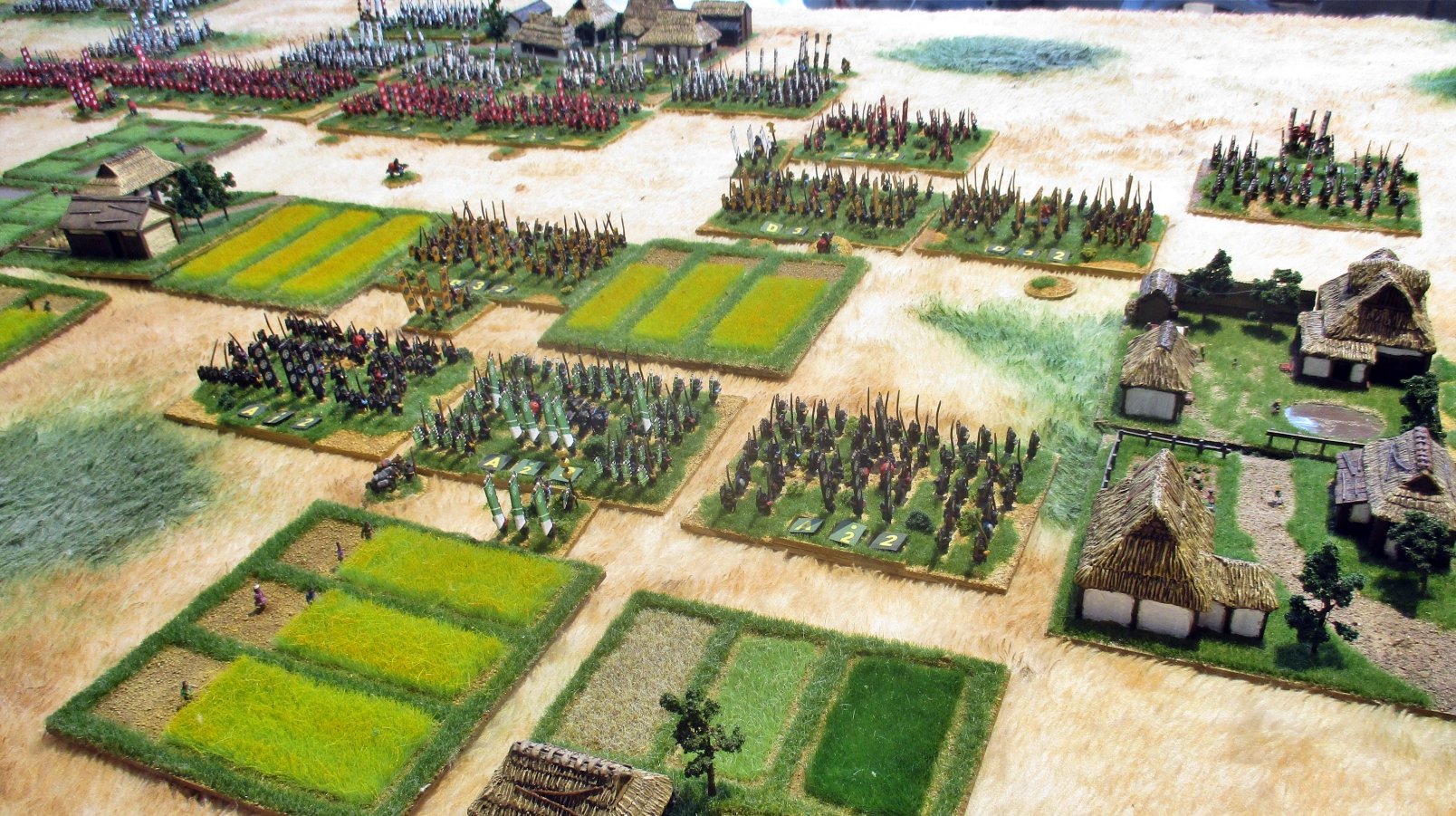 View of the battlelines. The Oda attack on their left hasn’t gone very well, but they will try to exploit their gains on their right. 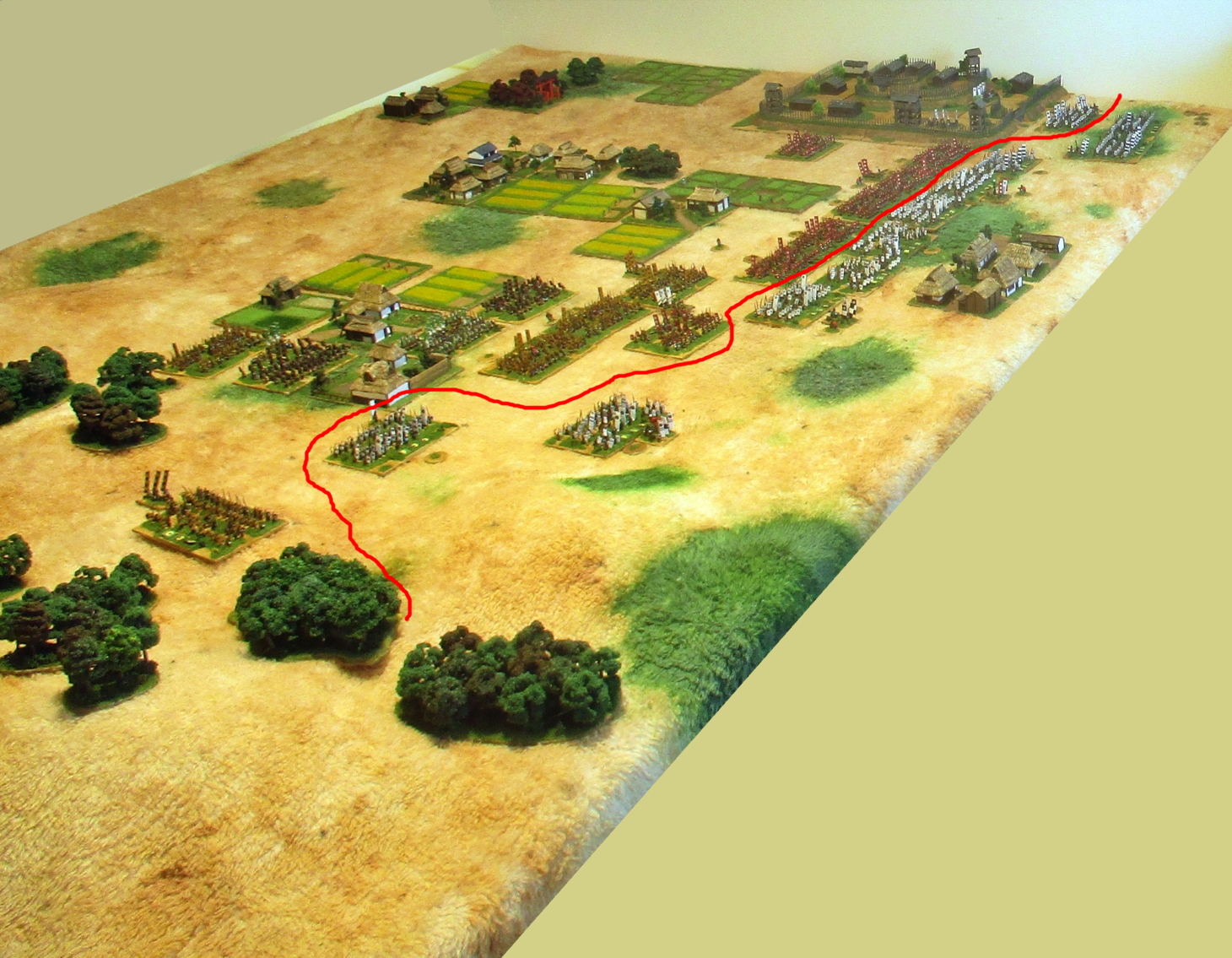 The Oda begin to withdraw on their right, to buy time for the other flank to win. 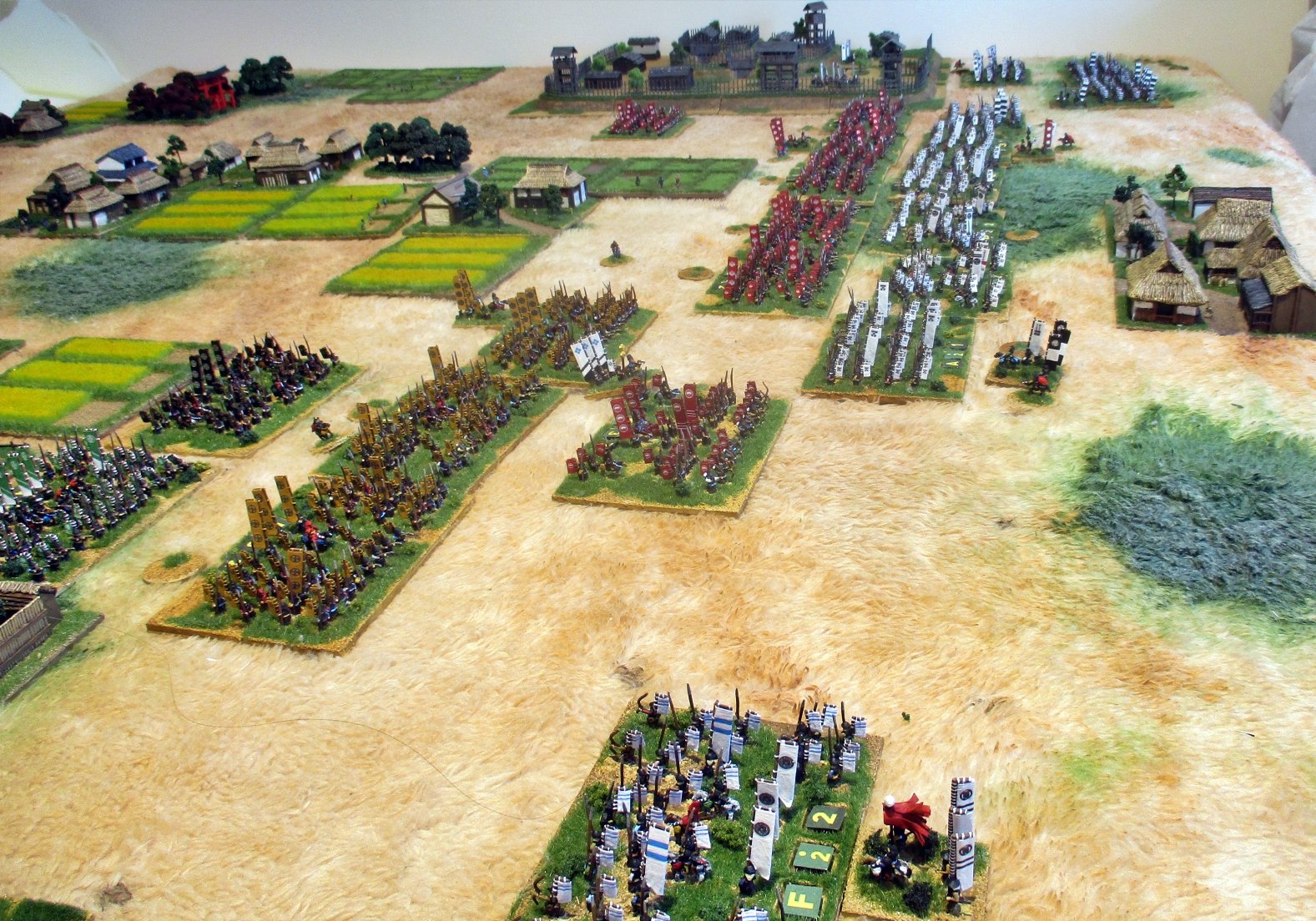 It’s a close thing, but the Oda manage to disengage before potential disaster on their left. The Hosokawa gamely sally out of the fort to add their support. 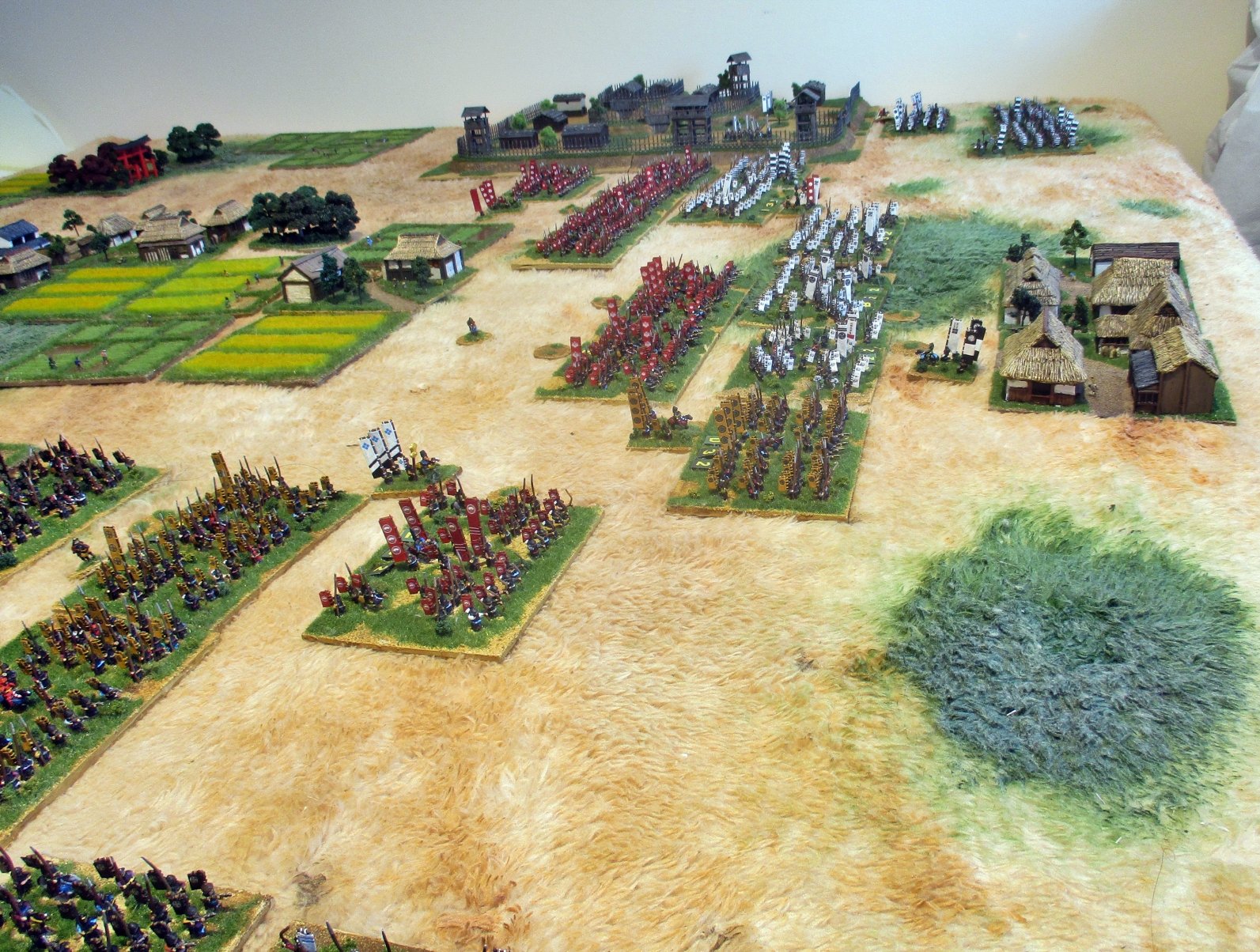 The rest of the army use the time well to finish off the Miyoshi left wing, the Miyoshi are broken. 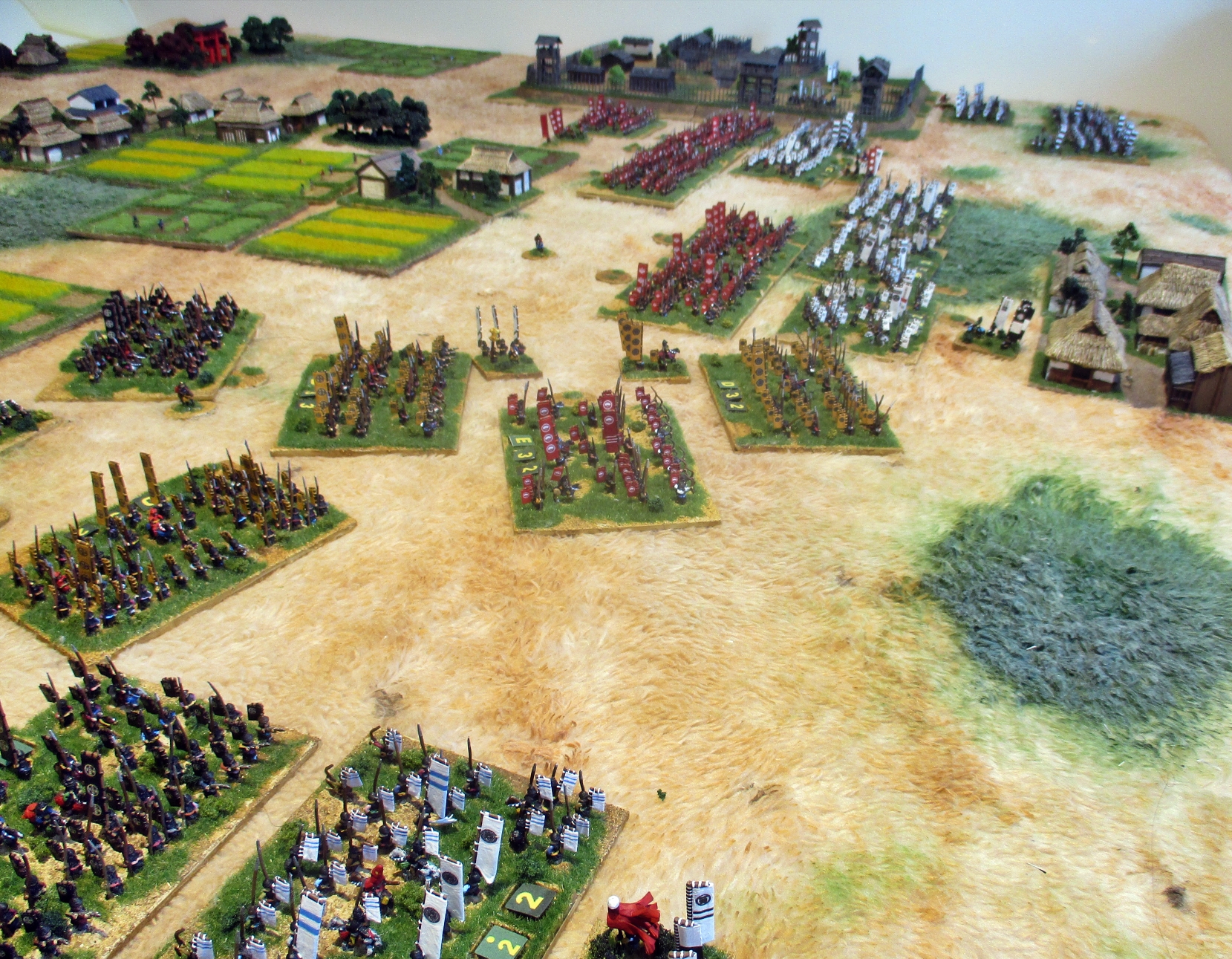 In the ensuing rout Miyoshi Nagayasu is killed and the army scattered. The Oda have tightened their grip on the capital. Nobunaga continues his campaign against the ikkō-shū, but these are an elusive enemy, and Ishiyama Hongan-Ji a formidable fortress. Shibata Katsuie is left to face off the Azai-Asakura in the North, with Hashiba Hideyoshi still trying to storm Enryaku-ji. You can see why Nobunaga crushed the Azai and Asakura first, before turning south.

There weren’t many new rules to try out. The compulsory move for shū on attack worked well, and I think a save bonus for units on defend in their original squares would be a good idea. Usually these units would have the advantage of shooting before combat, but some of the units here didn’t have a gun rating. I must try and take the time to use commander personalities next time. Obviously in most cases these would be entirely conjectural, but I’ll try to give them a go, not least as playing with existing ideas will likely generate ideas for others.

4 thoughts on “The Battle of Shōryūjijō, a campaign game.”